But September results have left investors a bit worried

"Should have invested three months ago"- Ambuja Cements will stoke investor's FOMO (fear of missing out) for some time to come. In the last three months, the company has given a lucrative return of 38.4 per cent and has been the second best performer of the BSE 200 index, just behind IndusInd Bank. 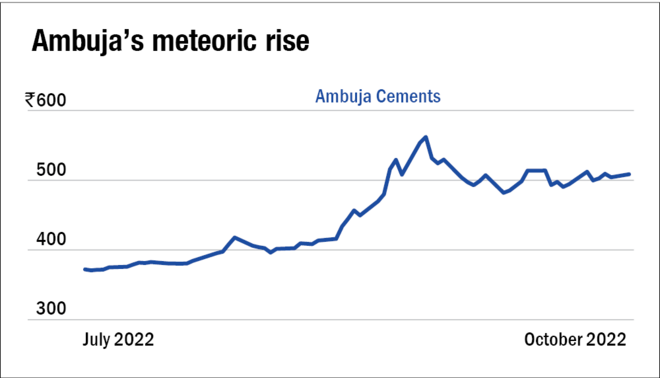 The Adani factor
In a repeat of what is becoming a trend in the Indian market, Ambuja's sudden rise is related to the Adani brand. Holcim, a Swiss multinational company and the promoter of Ambuja Cements, decided to exit its Indian operations to focus on core markets and have a portfolio of sustainable products. Adani Group, looking to enter the cement segment for a long time, saw this as a fast-track opportunity to become a leader and paid Rs 51,000 crore to acquire a 63.1 per cent stake in Holcim. Ambuja Cements also holds a 50.1 per cent stake in ACC. Following the acquisition, Adani Group has emerged as the second largest cement player in India behind Ultratech.

A capital push
On October 8, 2022, Ambuja's board passed a resolution for the preferential allotment of warrants to Adani family company Harmonia Trade and Investment. Ambuja has issued 47.7 crore warrants at Rs 418.9 per share, which totals up to Rs 20,000 crore. Each warrant can be converted to one equity share, and the rights can be exercised in the next 18 months. After conversion, Adani Group will hold a 70.3 per cent stake in Ambuja Cements.

Possible downturn
While the party is still on for Ambuja investors, September results have turned out to be a spoilsport. The company's standalone profit saw a whopping 69 per cent YoY (year-over-year) decline, despite a 13 per cent jump in revenue. In addition, the bottomline took a huge hit due to an increase in power and fuel costs, which jumped 83 per cent YoY. While a fall in profit was expected, the magnitude has left most dumbfounded.