Changing dynamics in the world of promoter pledging | Value Research https://www.valueresearchonline.com/stories/47518/changing-dynamics-in-the-world-of-promoter-pledging/ Find out how promoter pledging has changed in the last 10 years

Changing dynamics in the world of promoter pledging

Promoters generally pledge their shares to raise money for their business or personal requirements. However, when share prices fall, promoters have to pledge more shares to prevent their lenders from selling pledged shares in the open market. If pledged shares are sold, it will lead to a further fall in the stock price. Many companies fell prey to such incidents when pledged shares were sold by lenders. A recent case in point is Zee Entertainment.

The markets have started spotting this risk beforehand. A company with high promoter shareholding being pledged now comes under market scrutiny and pressure. And therefore, the practice of promoters readily pledging their shares to raise quick money is now gradually losing momentum.

The following graph illustrates a 10-year trend of promoter pledging, which has started falling since 2017 because of the growing scrutiny over promoters pledging their shares and a tendency among lenders to sell pledged shares in the market. 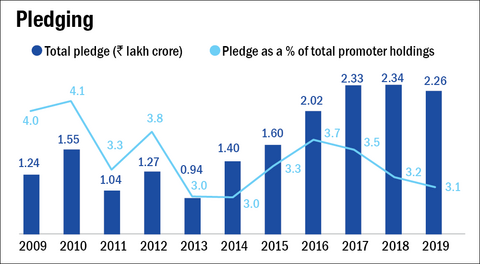 As shown in the graph titled 'Pledging', total pledging in comparison with the promoters total holdings is witnessing a fall. However, there is an uptick in the number of companies with pledged shares and the number is even higher than the previous year when companies with significant pledging started blowing up. Currently, they stand highest in the decade as seen in the following graph. 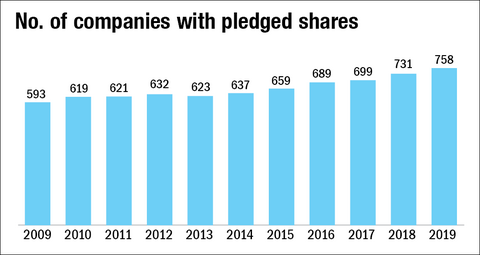 Note - Data as of September 30. The above analysis is based on the pledging data of all the BSE-listed companies over the past decade.

The ugly, the bad and the good