What makes a stock multibagger? | Value Research https://www.valueresearchonline.com/stories/46441/what-makes-a-stock-multibagger/ Multibaggers are the most sought after in the world of investing but picking one early enough isn't easy. We analysed the biggest multibaggers of the last 10 years to understand their common traits and here's what we found

What makes a stock multibagger? Multibaggers are the most sought after in the world of investing but picking one early enough isn't easy. We analysed the biggest multibaggers of the last 10 years to understand their common traits and here's what we found The term 'multibagger' was coined by the legendary investor Peter Lynch in his book One Up on Wall Street. A stock that multiplies more than twice is known as a multibagger. Potential multibaggers are much sought after in the world of investing. While investors are often attracted towards multibaggers, picking one isn't easy. We analysed several stocks to understand the characteristics of multibaggers. To do that, we looked at the biggest multibaggers in the last 10 years. By analysing their growth, we concluded that three things make a stock a true multibagger: time, earnings and an extra advantage. Let us look at each of these.

Time
A sustainable multibagger is created over time and not overnight. Overnight gains and the driving force behind them are often short-lived. Consider the top 15 multibaggers over the last 10 years (see the second table). Their returns have accumulated over the years - gradually. It didn't happen in a few days or months.

On the other hand, when a stock multiplies manifold in a short span of time, chances are high that the company will fail to meet the market's expectation. For example, consider Vikas WSP, a guar-gum-powder manufacturer. Manufacturers of guar-gum powder hit a jackpot in 2012, when it was discovered that guar can act as an essential ingredient for mining oil and natural gas in a process called hydraulic fracking. This caused Vikas WSP's stock to become a seven bagger in just nine months. However, the company's shares nosedived to historic lows in the same year because of overoptimism and non-fulfilment of orders.

So, if you think that you have missed the bus as far as a stock is concerned, don't be regretful. It may well be that the bus reaches the next stop very fast but fails to reach the destination. A sustainable multibagger is created over time and gives enough opportunities and time to buy it. It is never late if you have spotted a one.

Earnings and room for earnings
A big driving force behind the long-term performance of a stock is earnings growth. Look again at the multibaggers table. The major contributing factor in their returns is multiplication of earnings. So, while picking potential gainers, place your bet on companies which are going to increase their earnings. No matter how well you know a company, if you are not confident about its earning capability, it would eventually turn out to be just an average stock.

Secondly, for a company to multiply earnings over time, its market should be scalable. A salt maker might not become a multibagger as its market is not scalable, but the room to grow for a company would be higher if its market is underpenetrated or demand can be increased to a much higher scale.

The extra advantage
Coming back to the multibaggers table, you will observe that in 14 out of 15 stocks, stock returns have been higher than revenue or earnings growth. If we say earnings drive stock performance, why have these stocks multiplied more than the growth in their earnings? What is that extra thing which has driven their returns to much higher levels? This 'extra' is the market's confidence in company's future and its earnings. The more the market is confident about a company, the more premium it will command, which is reflected in the company's price-to-earnings multiple. Following are some factors that instil confidence in a company.

Sustainable increase in scale and margins
A high scale has many advantages. It improves margins, allows a company to absorb short-term disruptions and attracts talent. With a higher scale, a company can venture into new geographies, shake up smaller players and get higher negotiating powers. One such example is Bajaj Finance. With a fast turnover of capital, it has achieved a scale, which has resulted in a lower cost of funds and ability to serve more customers with the same resources. Over the years, its P/E multiples have risen.

Another example is La Opala. In 2008, the company had just 5,000 metric-tonne capacity and 1.8 per cent net margins. Over the years, it has increased its production capacity to more than 20,000 MT and alongside improved its net margins to 26 per cent in FY18. During this phase, its P/E multiple has gone up from single digits to more than 30.

Strengthening of brand or change in perception
Say, you go to a hypermarket to buy a dinner set. How many brands do you know? Probably, the first name would be La Opala. Similarly, how many electric-stabiliser brands do you know other than V-Guard today? This is brand advantage, wherein consumers have preference for a particular brand. Therefore, strengthening of a brand leads to increase in premiums. Another similar example is Page Industries. Its brand Jockey has improved its visibility in India over the last few years.

A change in consumer perception of an existing brand also plays a vital role. Take Eicher Motors' Royal Enfield motorcycles for instance. Ten years ago, these motorcycles were perceived as bulky, boring and old-fashioned. But now, they have become bold, masculine and classic. Motorcycle lovers want to own them today. This craze has led to multifold rise in the company's valuations. 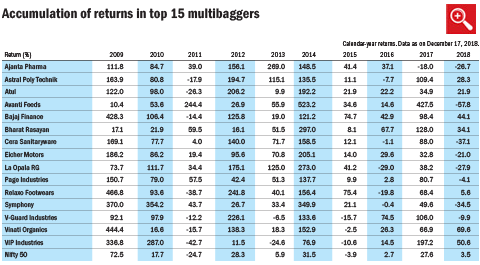 Conglomerate discount and niche premium
If you do many things, probably you are the master of none. Therefore, the market tends to discount conglomerates with diversified products. On the contrary, focused companies command a premium. This is because the company is able to put its heart and soul in a single product and incessantly improves it.

Symphony had a wide range of consumer products during 1990 to 2000. It manufactured air coolers, room heaters and even washing machines. The diversification did not make any sense because the company did not have synergies at the marketing level, which divided its attention. This led to a near bankruptcy in 2001. Eventually, Symphony scrapped all its segments and focused only on air coolers. It went on to become one of the fastest-growing companies in India.

Ajanta Pharma has also kept a narrow focus. It has presence in a narrow range: cardiology, ophthalmology, dermatology and pain management. This is contrary to other Indian pharma companies which do not have such a narrow focus. These high-growth segments have helped Ajanta grow faster than the industry and become a multibagger.

A competent management
Early adoption of new technology as per the needs of the market is a skill not exhibited by all. Companies or managements which are able to react swiftly to the changing environment are the ones which not just survive but also flourish.

Bharat Rasayan, which became an 80 bagger over 10 years, has grown fast on the back of identifying and launching generic versions of agri-chemicals whose patents are about to expire. This early-mover advantage has made it a reliable supplier.

Astral Poly Technik, too, was able to identify the opportunity in higher-quality and higher-margin CPVC pipes - plastic pipes which can carry both cold and hot water - when conventional metal GI pipes were prevalent. It turned out to be a wise decision and Astral Poly went on to become a multibagger on the back of an increase in the price multiple.

Ajanta Pharma has thrived on its strategy of introducing the maximum number of first-time formulations in India. Around 70 per cent of its 200-plus brands are first-time launches in the country.

Take Symphony and Videocon for examples. Both are into consumer durables and yet the difference in the valuation premium is huge. Symphony's price-to-earnings multiple is 54 times, while Videocon has traded at a high of 14 times, until 2009, when it was profitable. Other than the difference in the earnings growth rate, the major difference between the two companies is corporate governance. Symphony is considered to be transparent, while Videocon doesn't have a good image.

Take Cera Sanitaryware, which was trading at a discount its to peers in 2013, when it decided to enter into the related bathroom-fittings segment and began manufacturing things like faucets and tiles. This discount was for the fear of failure in the new segment. But when company was able to put things in the right direction without compromising on the margins, in 2015, the discounting disappeared, which improved the company's valuation multiples.