What do share buybacks from 2022 tell us about their effect on stock prices?

Once you are a company's shareholder, you have a share in its profits. But how does a company distribute these profits among its shareholders?

Well, it may give out dividends - a fixed sum of money sent to all shareholders. However, the company may use its profits to reward shareholders differently through something called a buyback.

A buyback is a company repurchasing its own shares from its shareholders. It can execute this in the following two ways:

It can set a maximum buying price and buy its shares from the open market. In an open market buyback, shareholders are not allowed to participate. However, as the number of outstanding shares goes down, it increases earnings per share. Thus, the existing shareholders get a bigger piece of the company's profit pie in the future.

The company may also choose to issue a tender offer, wherein it offers to repurchase its shares from its existing shareholder at a premium. In this way, it gives an option to the shareholder. Shareholders who want to cash out earn a premium for the faith they have shown over the years, and those who choose not to participate get a larger chunk of the company's future profits. On top of it, if you decide to participate in the buyback, your capital gains won't be taxed, making this the most tax-efficient way to reward shareholders.

But here's the catch. There's a general assumption that when a company declares a buyback, its share prices go up or at least reach the maximum price offered by the company.
So, what does the data say? Is this assumption based on a real trend or the mere expectation that the market will react in a certain way?

To find out, we looked at the share prices of 30 companies (market cap of greater than Rs 500 crore) that completed their buyback in 2022 (till November 30, 2022). Of these 30 companies, 21 took the tender offer route, while the remaining bought back the shares from the open market. 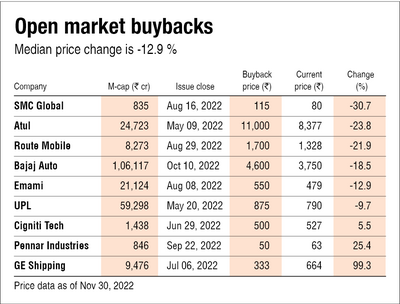