NTPC shares on a dream run | Value Research https://www.valueresearchonline.com/stories/50914/ntpc-shares-on-a-dream-run/ Share price crosses Rs 150 mark for the first time in five years. What is pushing the stock up?

Share price crosses Rs 150 mark for the first time in five years. What is pushing the stock up?

National Thermal Power Corporation, popularly known as NTPC, has been on a dream run as the stock has given 17.6 per cent returns in the last three months and 38.7 per cent returns during the last year. Despite being the country's largest power producer, it hasn't been that impressive in the context of the share price. The company has only given a return of 2.5 per cent CAGR and a dividend-adjusted return of 6.3 per cent CAGR in the last 10 years. 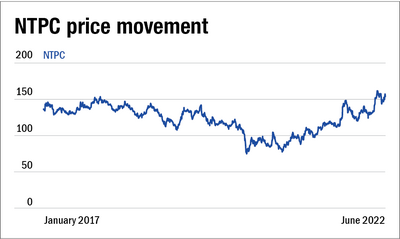 But lately, as we can see in the chart, the share price of NTPC has been on a roll and has breached the Rs 150 mark for the first time since 2017. The last time its share price was above Rs 155 was in 2012. So what has changed with the company and what has been pushing the stock price up? 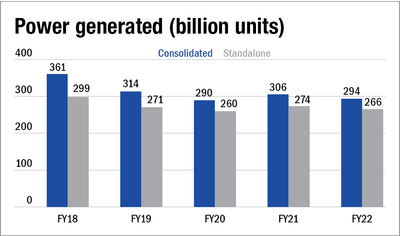 Foray into renewable energy (RE)
Another major positive that investors are cheering about is the company's efforts to increase the contribution of renewable energy. It targets an RE capacity of 60 GW by 2032. With 3,440 MW of RE projects going on under EPC mode, the Street estimates that NTPC will achieve its target soon. The company's total installed capacity also increased during the year by 5.6 per cent on a standalone basis and by 5.9 per cent on a consolidated basis. At present, NTPC has 54,597 MW on a standalone basis and 68,302 MW on a consolidated basis as of March 2022.