Delhivery stock price: Delhivery’s share price dips - What is happening? | Value Research https://www.valueresearchonline.com/stories/51656/delhivery-on-a-free-fall/ Share price below issue price in a span of just six months. What is pulling the stock down?

Delhivery on a free fall

Share price below issue price in a span of just six months. What is pulling the stock down?

The tumble of Delhivery, one of the largest logistics companies in India that got listed in May 2022, has led to much head-scratching in Dalal Street. The shares have plummeted 22.1 per cent from their list price and are now trading below their issue price of Rs 487. And it seems like this decline is accelerating. In the last one week, the stock has dipped 31.0 per cent! 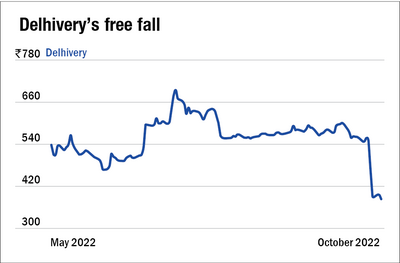 So the question plaguing investors is, what changed? What is the reason behind this plunge?

As is always the case, many factors are at play behind this decline.

Decline in volumes of revenue sources
Of the company's five revenue sources, volumes in Supply Chain Services (SCS) and Truckload (TL) businesses have declined in the recent quarter compared to the previous quarter owing to seasonality in its clients' businesses.

Subdued consumer discretionary spending
You would think a logistics company would see a surge in revenue with e-commerce companies dishing out heavy discounts during the festive season. However, this has not been the case. The market sentiment in the second quarter this year remained broadly unchanged from the first. The management has reported that despite the festive season, the average user spend and total active shoppers were muted due to high inflation.

Widening of losses
Since its commencement of operations, the company has not registered a single year of profit. And to add to the injury, the losses keep getting wider. The company's standalone loss widened by 180 per cent YoY (year-on-year) and magnified 295 per cent QoQ to Rs 308 crore. In addition, expenses rose 11.4 per cent QoQ (quarter-on-quarter), and the revenue declined by five per cent during the same time period.

A glimpse at Delhivery's financials

So, has the stock price bottomed out?

Since the pre-IPO shareholders' lock-in period lifts on November 10, 2022, we expect the downtrend to continue.

Suggested read: Six parameters to look for in a company before investing