‘ELSS or NPS: Where should I invest?’ | Value Research https://www.valueresearchonline.com/stories/51066/elss-or-nps-where-should-i-invest/ Dhruv wants to earmark his tax-saving investments for retirement. But not sure whether he should opt for NPS or ELSS. Here is how he can decide.

'ELSS or NPS: Where should I invest?'

Dhruv wants to earmark his tax-saving investments for retirement. But not sure whether he should opt for NPS or ELSS. Here is how he can decide.

Dhruv, a 32-year-old legal professional, takes home about Rs 80,000 a month. For saving taxes, he plans to utilise the maximum permissible deduction of Rs 1.5 lakh under Section 80C of the Income Tax Act. Dhruv wants to earmark this investment for his retirement. However, he is confused between tax-saving mutual funds, also called equity-linked savings schemes or ELSS, and the National Pension System (NPS) Tier I. He seeks our advice on the appropriate investment option for him.

What is the NPS Tier-I?

Where does the NPS invest your money? How is the NPS different from ELSS? 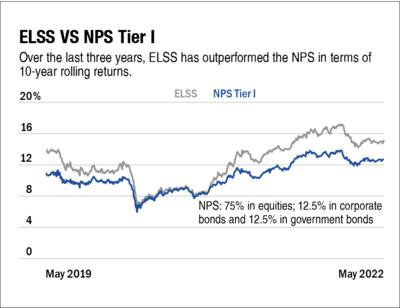 Which one should you choose?