Trailing and Rolling Returns: Meaning, Calculation, Example | Value Research https://www.valueresearchonline.com/stories/50987/rolling-returns-vs-trailing-returns/ What are trailing and rolling returns in mutual funds? Let’s understand the two popular mutual fund returns calculation methods and find out the difference between them.

When we look to invest in a mutual fund, we tend to check its past performance. We have two particular return calculations, a trailing return and a rolling return. These help us understand the fund's performance and compare it against the benchmark and its peers. Let's understand both these metrics in detail.

A trailing return measures returns between two dates. They are also known as point-to-point returns since you are looking at performance between a starting date and an end date. It shows a snapshot of the mutual fund at a specific point in time. This metric can be used to measure returns year-to-date, one year, three years and so on. Trailing returns can also be calculated from the current date from the fund's inception date.

These are a fairly simple way to evaluate mutual funds since you're simply charting and measuring price movements that have already occurred. You can find this metric on Value Research Online easily on any fund's page by scrolling down to the 'Trailing Returns (%)' table. It looks like this:

A rolling return on the other hand is an average annualised return taken from a specific period. They are nothing but trailing returns calculated on a chosen frequency such as daily, weekly or monthly. This metric gives a comprehensive picture of a fund's performance compared to the trailing returns. This helps us gauge the fund's performance clearly at different points in time and makes it more indicative of the actual performance of the fund. Due to different periods, the return consistency of the fund over the period can be analysed as it considers both upside and downside market trends. Rolling returns is a premium feature and can be accessed by the premium subscribers on Value Research Premium. You can see it by selecting 'Rolling Returns' under the 'Performance' tab on any fund's page. Investors can add custom dates and change the rolling return years. It looks like this: 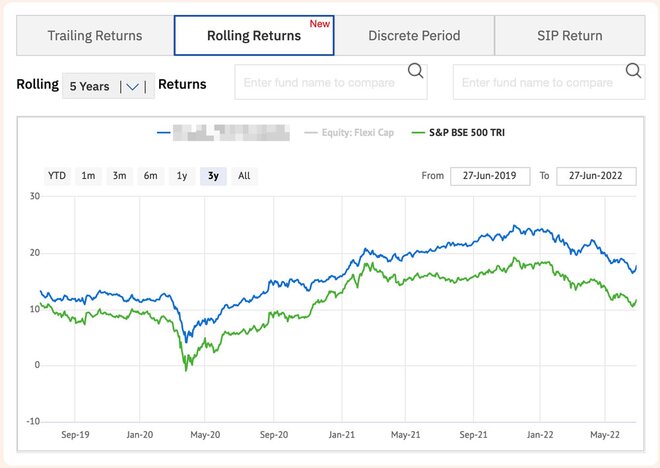 The disadvantage of trailing return is that it doesn't show the full picture. If you've selectively taken the starting date that had the lowest NAV and the end date with the highest NAV, it shows a healthy return. But what if the fund didn't perform well during the rest of the days? It is incredibly difficult for an investor to selectively find such dates and there also can be huge variations in between. The rolling return negates this issue by providing a clear picture of how much returns your fund has given over the same period on a continuous basis.

What is NAV in mutual funds?

Difference between absolute and annualised returns