Timing the Exit and Re-entry | Value Research https://www.valueresearchonline.com/stories/21192/timing-the-exit-and-re-entry/ Buy low & sell high sounds like a sure-shot strategy, but it is very difficult to execute in real time…

Timing the Exit and Re-entry

Buy low & sell high sounds like a sure-shot strategy, but it is very difficult to execute in real time…

My investment advisor has suggested me to shift my equity mutual fund investments like HDFC Equity to a liquid plan instead of redeeming it when the markets are not faring well. The idea is to re-enter investments when the NAVs go down. What are the advantages of doing so?
-Usha Sekar

Investing through equity mutual fund is a great vehicle to accumulate long-term savings. However, recent performance of the stock market and equity funds has disappointed investors. Even disciplined investors’ faith in equity investments is shaken these days. Moreover, the prevailing high interest rates on fixed income add to the injury with the notion of higher opportunity loss for those investing in equity funds.

You are being advised to follow a strategy which appears to be very tempting but is difficult to execute. As a concept – buy low and sell high – is a sure-shot way to build wealth. But, getting this right amounts to timing the market correctly, which is difficult in real time. 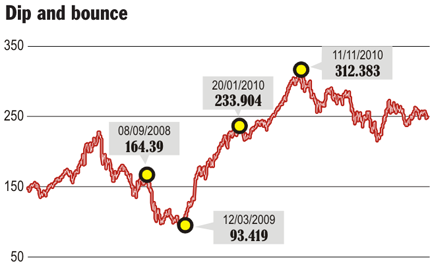 Market timing is difficult because stock market movements are unpredictable. In hindsight, one will be able to demonstrate and also insist on the strategy suggested by your advisor, but it is a lot different to practically follow it. Moreover, it is human behaviour to invest with confidence in a rising market. But we are fearful after the sustained poor performance on our investments. It is for this reason that we advocate regular and systematic investments for the long-term and the fact that markets turnaround when you least expect it. HDFC Equity remains a good choice for its compelling long-term track record. You should worry and think of exiting a fund when it underperforms its benchmark and peers regularly.
Remember: investment in equity is an act of long-term faith in its ability to deliver superior returns.