Should you tweak your exposure to government bonds under NPS? | Value Research https://www.valueresearchonline.com/stories/50905/should-you-tweak-your-exposure-to-government-bonds-under-nps/ Given the recent rise in the interest rates, let's see how much should you invest in gilt funds

Should you tweak your exposure to government bonds under NPS?

Given the recent rise in the interest rates, let's see how much should you invest in gilt funds

Investment in gilt funds or government bonds is generally more volatile than short duration funds or corporate bond funds. That is primarily because gilt funds dominantly invest in government bonds of medium to long duration, which are overly sensitive to interest-rate movements. But at the same time, they have a lower or almost negligible credit risk in comparison to corporate bond funds.

The Reserve Bank of India has already hiked the interest rates by 40 basis points and considering the fact that more successive rate hikes are expected in the near future, government bonds are likely to be more volatile over the short term. This is why these bonds haven't performed as well as corporate bond funds in the immediate short-term.

However, such impacts are usually on a short-term basis and fizzle out over the longer period of time. Look at the returns below, though gilt funds have returned less in the immediate near term (six months and one year), they have returned pretty much similar to what corporate bond funds have in the long-term (three and five years). In NPS Tier I, your money is anyways locked till the age of 60 for which you still have six good years in hand (considering you are 54 years old). 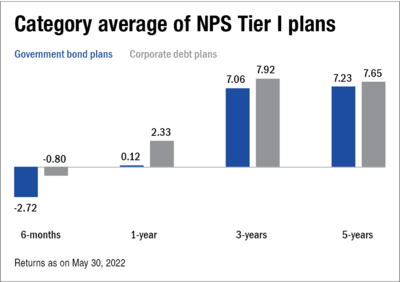 Further, even if you have allocated 50 per cent of your fixed-income allocation to government bonds, they are still just one-fourth (25 per cent) of the complete portfolio. So that should not make a huge or a significant impact on your overall returns.

Also, if you decide to reduce the allocation to government bonds right now because of the existing interest rate scenario, you will have to again reverse it at some point of time. This would demand active participation from your side. And it is unlikely that doing so will make a huge difference to your accumulation by the time you retire. So just see if you are willing to put such efforts and additional credit risk by increasing your allocation to corporate bond funds for a limited benefit.

Which NPS fund should I invest in?

Rising inflation? Bonds can be an answer!

NPS for your retirement

Is the contribution to LIC Pension Fund under NPS eligible for tax saving?

Where to invest a lump sum for retirement?

Investing in both ELSS and NPS

All about tax deductions