UTI Nifty200 Momentum 30 Index Fund received a dismal response at the time of its NFOs but over the last few months, they have attracted high inflows. As their names indicate, this fund invests in high momentum stocks.

UTI AMC launched its Nifty200 Momentum 30 Index Fund in March 2021. It managed to raise Rs 48 crore - not a very remarkable figure. However, with an estimated inflow of over Rs 950 crore since launch, the fund's assets have now grown by an astounding 21 times within a year, to Rs 1,061 crore. About 75 per cent of these flows have come in over the last six months alone.

Despite this impressive run, the fund makes up only about 1.7 per cent of UTI AMC's nine passive offerings and not even half a per cent of the total assets of over Rs 2.2 lakh crore that the fund house manages. 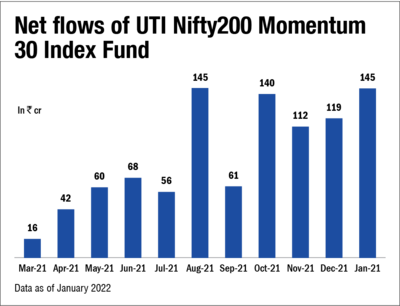 The UTI Nifty200 Momentum 30 Index Fund aims to track the performance of the top 30 companies within the Nifty 200 by momentum. The momentum is calculated by the 'normalised momentum score', which is based on the six- and 12-month price return, adjusted for volatility. In February 2022, Motilal Oswal also launched its Motilal Oswal Nifty 200 Momentum 30 Index Fund tracking the same index.

We talked to Sharwan Goyal, fund manager of UTI Nifty200 Momentum 30 Index Fund, about the motive behind this scheme. He said, "Within the passive investment arena, alternatively weighted -or smart-beta - strategies have witnessed remarkable growth largely on the basis of their outperformance over broad market-cap based indices." He also said that smart-beta Investing is a well-recognised mode of investing in developed countries, though at a very nascent stage in India. Hence, the fund house launched the fund to mark its presence in this category and offer investors a smart investment solution with a proven track record.

Due to the nature of the index, the fund's portfolio could undergo sector rotation when the index undergoes rebalancing and thus certain sectors where stocks are witnessing an upward price momentum could end up with a higher weightage, since there is no capping on a particular sector. For example, the fund moved its major holdings from sectors such as healthcare (about 22 per cent) in May 2021 to metals (about 27 per cent) the very next month. It made a similar jump to technology (about 27 per cent) in December 2021, with metals now making up less than 4 per cent. In line with its construction, the fund holds about 90 per cent in large caps and only about 11 per cent in mid caps.

The Nifty200 Momentum 30 TRI has on an average returned 6-7 per cent more than the Nifty 500 TRI. However, during downturns, the index has been susceptible to higher drawdowns than the broader market index. 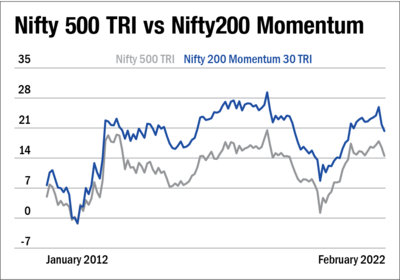 Though the momentum index has outperformed the broader market handsomely, it has been more volatile than the broader market with intermittent lull periods. Sharwan Goyal of UTI Nifty200 Momentum 30 Index Fund also cautions that momentum is a relatively aggressive investment style and suitable for those willing to take risk to generate better returns.

Investors expecting long-term growth could very well do without this fund. However, if you find them promising, you can have a tactical allocation to them of not more than 5-10 per cent.

Which is the best Nifty index fund?

Intraday NAVs to be disclosed for ETFs

Should you opt for daily SIPs?

How and where to invest a lump sum for your child's education?