When greed trounces fear | Value Research https://www.valueresearchonline.com/stories/49613/when-greed-trounces-fear/ The markets are overexuberant and investors need to be cautious The markets are overexuberant and investors need to be cautious 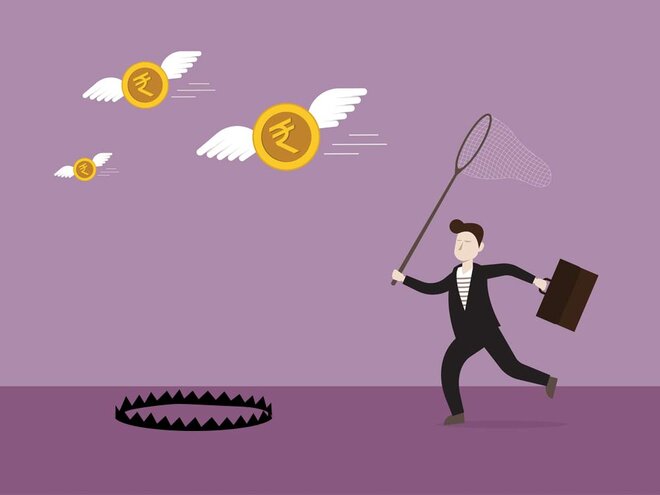 It's that time again when anyone who knows you are associated with investments feels compelled to offer you his opinion on the equity markets irrespective of whether you have asked for it or not. When analysts bring out yet newer metrics to justify sky-high valuations and when 'this time is different' takes on a fresh sincerity, spoken in 'all-knowing' tones by the newly minted CFA, or the experienced venture fund manager seeking to offload a stratospherically priced equity offering he brings to the public market. Zomato, the poster boy of India's 'new economy' valued at a 'mere' $5.4 billion in Feb 2021, was oversubscribed by investors in July 2021 at on offering price of about $8 billion. If you happened to be among professional fund managers who are sceptics (yes, there are a few of those), you run a serious career risk. This is among the best of times to examine if the market is overexuberant.

Speculative trading
People participating in the equity markets often regard themselves as investors - even if their 'investment' horizon is a few weeks. Not so. In the very short term (especially in periods where there is no result or significant corporate announcements), anyone trading a short-term option is not expressing an investment opinion. Instead, he is taking a speculative bet that he will outsmart the person on the other side of the trade. Most of the stock options traded in the Indian markets are near-term options. Option contracts traded can be taken as a proxy for the level of speculative interest in the market. The graph 'Stock options contracts traded on NSE' shows the massive increase in volumes over the past year and a half. Speculative activity is booming. 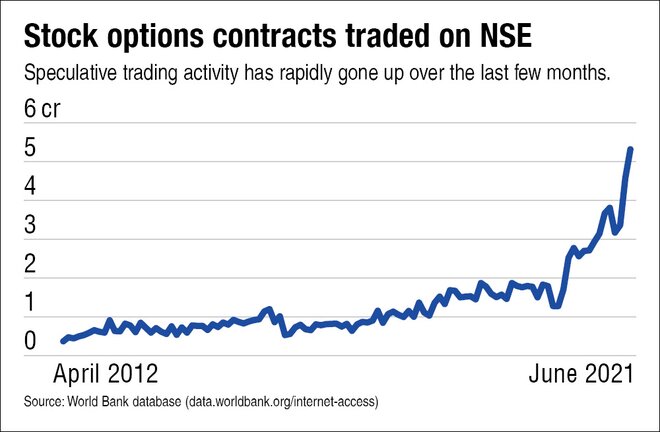 But investment interest is growing too
In FY21, investors opened 14.2 million fresh demat accounts, as against a previous three-year average of 4.3 million. ICICI Prudential Mutual Fund's new fund offer of a flexi-cap fund created history when it collected about Rs 10,000 crore - the highest-ever in the history of mutual funds in India. Over four lakh retail investors applied for the issue. While these numbers reflect enormous and growing investor interest, much of this is fuelled by investors new to markets, and attracted by high returns delivered over the past months, with perhaps poor understanding of risks.

Exuberant markets lead to robust issue pipelines (an IPO is often a signal that the current owner thinks that the offer price compensates adequately for future potential upside, given risk) and that is indeed the case. Against the previous three-year average equity issuance of Rs 23,642 crore per year, the current year till July has already seen Rs 29,936 crore being raised. The pipeline is robust, with issues like LIC and Paytm waiting to hit the market. The year 2017 had witnessed the highest raise since 2007, at Rs 75,279 crore, dominated by issues of GIC, New India Assurance, SBI Life, ICICI Lombard, HDFC Standard Life and IRB InvIT. If LIC makes it past the gate this year, that issue alone will likely trump the previous record.

But we are not in a high-growth scenario
There are two arguments that are advanced to explain this exuberance. One, growth is back and corporate profits are booming, and second, the cost of money (interest) will remain low because of RBI/government action.

Growth for the next 12-18 months seems to be in the bag. COVID caused a sharp contraction in revenues in April-June 2020 and that caused companies to cut costs sharply to remain afloat. Most companies reduced staff, marketing and travel costs, and other overheads. Quarterly results have reflected increased margins since Q2 of the previous financial.

On a low base, companies in FY22 will certainly report higher sales and better margins over the full year. However, margin pressures are already evident as non-material costs rise. With only the most essential workers remaining and with corporate profits rising along with inflation, employee compensation too will rise. On the other hand, after a steep increase in the prices of many raw materials, transmission to end users is facing a push-back. Final consumer demand, while recovering, is nowhere close to levels only 24 months earlier. It is reasonable to expect that in general, margins will compress for every quarter here on.

So, while earnings growth is here, the question of whether it is here to stay is still unclear. A more nuanced argument is that of market-share consolidation, with large companies benefitting at the expense of smaller due to GST. While this may indeed benefit some listed companies, it cannot overall be good for the economy. If smaller and marginal companies go out of business, there is a loss of employment and more people fall back into poverty. In a country starved of employment opportunities, this is only going to compress consumption numbers.

Overall, there has been significant loss of health and jobs. How can overall consumption have gone up? Most companies reporting better consumption are in sectors like exports (IT, pharma, chemicals, auto ancillaries), where growth is dependent on other economies. Domestic growth in metals is driven by international prices and import restriction. Crop inputs by international demand and, domestically by government support. Domestic consumption growth, especially in discretionary spend, reflects weak spending power. This writer doesn't see reasons to extrapolate high growth linearly looking beyond the 18 months at an economy level.

The other argument - that of low interest rates - will also have to be examined carefully. As anticipated almost a year ago in these columns, inflation has remained high and consistent despite attempts to portray it as transient. The Monetary Policy Committee's target is unambiguously anti-inflationary and no amount of geek talk can take away from the fact that persistent inflation requires higher interest rates. In fact, low interest is inconsistent with expectations of an economic revival. Also, rising bond yields and repeated cancellation of government bond auctions because of inadequate interest is the markets way of telling the RBI that its powers to set yields is indeed limited. A surprise increase in interest rates will rattle the equity markets, but what can prick the balloon is a global spike in rates, which seems increasingly likely.

It is at extremes in market levels that it is important to look at what experience teaches. I end with two quotes from market guru Jeremy Grantham:
"All bubbles end with near universal acceptance that the current one will not end yet ... because."

And another - "The one reality that you can never change is that a higher-priced asset will produce a lower return than a lower-priced asset. You can't have your cake and eat it too. You can enjoy it now, or you can enjoy it steadily in the distant future, but not both - and the price we pay for having a market go higher and higher is a lower 10-year return from the peak."

Those that are saying that the market is likely to go higher may well be right and are not purposefully selling you a lemon. Their advice certainly helps their careers. Only you can decide what helps your assets. May the force be with you!