'Value is gradually emerging in some mid and small caps' | Value Research https://www.valueresearchonline.com/stories/46222/value-is-gradually-emerging-in-some-mid-and-small-caps/ We speak to Amit Ganatra, Fund Manager, Invesco AMC, as he offers a fresh perspective on investment management, valuation assessment and stock selection

'Value is gradually emerging in some mid and small caps' We speak to Amit Ganatra, Fund Manager, Invesco AMC, as he offers a fresh perspective on investment management, valuation assessment and stock selection 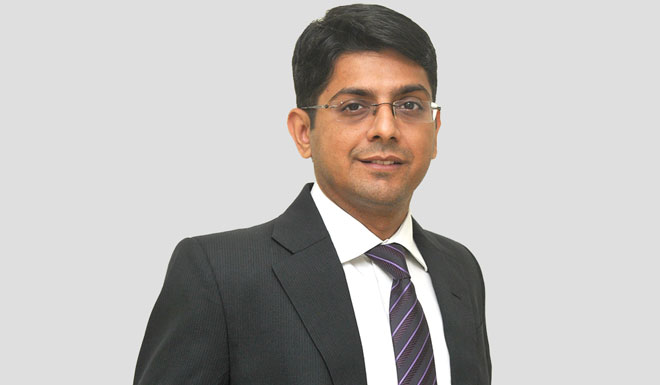 From being a sector specialist covering banking, to analysing property and construction sectors, and then becoming a fund manager overseeing six equity funds, including Invesco India Contra Fund, Amit Ganatra over the last 15 years has seen businesses grow from close quarters. Yet, years of rigmarole have not made him machine-like in his approach. He offers a fresh perspective on investment management, valuation assessment and stock selection.

A good communicator, Ganatra, however, admits it's not always easy to bridge the expectation gap between investors and the asset manager. In this interview with Kumar Shankar Roy, the fund manager talks about how a long-term approach towards investing reduces the importance of price-to-earnings multiples, and what the stock-picking strategy should be when overall market valuation is on a higher side.

At Invesco, we use various valuation tools right from simple price-to-earnings ratio to EV/EBITDA and EV/EBIT multiples, discounted cash flow (DCF), reverse DCF, comparing multiples intra-sector as well as relative to historical averages, EV/replacement cost, etc., to determine valuation attractiveness. For example, for sectors like IT and FMCG, the P/E multiple would work fine but for mining and utility companies, DCF and reverse DCF work better. For asset-heavy businesses, enterprise value/EBITDA or enterprise value/replacement cost is more useful.

Unless there is a large ongoing correction, high-quality firms with a clarity of earnings growth, clean balance sheets, and a solid management are optically expensive when it comes to valuation. In such a situation, doesn't it become necessary to be long term because such valuations may not be justified in a shorter time frame?
At all points in time, not all companies will be equally expensive and there will always be valuation opportunities available even in good companies with decent earnings visibility. For example, IT and pharma companies were attractive in terms of valuations last year; similarly, gas-pipeline and utility companies have been attractive in terms of valuations this year.

Besides, at any given point in time, it is important to have a long-term approach towards investing because only in the long term does the power of compounding of earnings on investor returns increases and importance of price-to-earnings multiples reduces.

Many companies go through tough times. Your Contra Fund actually looks at firms in the turnaround phase. Can you share some examples of companies that were doing well, then met with trouble and then embarked on a turnaround? How do you identify a turnaround and how much time does it take to reap the benefits of staying invested in such a business?
Invesco's proprietary stock-categorisation process has a separate category for turnaround companies. Presently (as on August 31, 2018), out of 121 categorised stocks, 12 companies have been categorised as companies that are in the turnaround phase. A common trait of turnaround companies is a strong business that is undergoing tough times either due to internal factors or external factors but has got a plan in place to carve out its path to superior profitability. It generally takes about two-three years for companies to complete turnaround and enter a growth phase.

Some of the current growth companies like IndusInd Bank, VIP, HUL, Britannia, Bata, L&T Finance, etc., have all been turnaround companies at some point in time in their respective life cycles.

Tell us about the process you use to avoid blow-ups in your portfolio.
At Invesco, we buy only companies that are categorised by our analyst team after exhaustive research and thorough due diligence. Besides, we consciously avoid companies with balance-sheet risks while maintaining a preference for those with positive cash flows, strong return on equity and return on capital.

Our investment strategy largely reflects our bottom-up conviction on specific companies and is mandate-specific. So, growth-biased strategy will not gravitate towards value and vice versa. Thus, by restricting ourselves to categorised companies and managing funds true to mandate, we do manage to avoid a lot of accidents.

Does a long holding period act as a troubleshooter? Does your experience show that giving years of time helps?
As mentioned earlier, at all points in time it's important to have a long-term approach towards investing. For example, during euphoric times, assume that a good business has been bought for Rs100 at a P/E of 10, with an earnings per share (EPS) of Rs10. The business is decent and its earnings are compounding at 15 per cent per annum. After three years of investment if the market euphoria ends and valuation multiples de-rate to, say, five times, despite 15 per cent earnings CAGR, the business will be valued at Rs75 only, which means five times P/E multiple at an EPS
of Rs15.

However, if the business keeps on compounding earnings at 15 per cent CAGR, after seven years, even if multiples do not revive, the business value will increase to Rs133, which means five times P/E multiple, with an EPS of Rs26. And if sentiments improve and multiples revive to 7.5 times, the same business, after seven years, would be valued at about Rs200, which means you double your money in seven years despite buying in euphoric times and overpaying in terms of multiples. This is how a long holding period acts a troubleshooter for investors. It reduces the importance of P/E multiples and increases the importance of compounding of earnings.

Recently, we have seen domestic stock markets rise to great heights. There is some uneasiness in terms of the narrowness of the rally. How do you view such concentrated performance?
Market valuation is undoubtedly on a higher side. The P/E multiple continues to be at a premium to the long-term average. But having said that, the P/E multiple also looks optically high because of the depressed earnings cycle. There still are valuation challenges in specific pockets across market caps that could compromise future returns.

From 2014 to 2017, the macros were good but the micros disappointed. From 2018 onwards, the macros in the form of currency, oil, interest rates, etc., are causing trepidation. For long-term investors, is it better to switch off from the day-to-day news because there is always something happening?
In the past, when interest rates were lower, higher P/E multiples for markets were being justified and to that extent, if the interest rates rise, multiples should normalise. As far as commodity prices are concerned, contrasting the popular perception, a recovery in commodity prices (including oil) is generally a positive catalyst for corporate-earnings recovery. This is because the strength in commodity prices is usually an outcome of strength in global growth, which in turn feeds into higher economic activity and hence eventually fuels the earnings cycle. Thus, rising commodity prices generally support the earnings cycle with a lag.

Changes in macros can lead to changes in P/E multiples and impact short-term returns. However, in the long run, earnings recovery and their eventual compounding will play a major role in the investor's return outcomes. So, to that extent, if multiples de-rate due to macro concerns, investors should take advantage since valuations would become more favourable.

How do you spot stocks with a high potential to become winners? Is there a framework that you use to achieve this?
We completely rely on our in-house investment process to shortlist high-potential stocks. For our Contra Fund, within our categorised universe, there is a preference for the following categories: companies in a turnaround phase, companies trading below their intrinsic value and growth companies trading at de-rated multiples.

Please share examples of winner stocks. What did you like about them, how long did you hold them to see good gains and what made them must-haves in your portfolios?
Invesco India Contra Fund has a specific stock preference and was thus able to identify sectors and companies that were in the value phase of their life cycles. The fund thus enjoyed the benefits of not only earnings growth but also of P/E re-rating as these sectors and companies transitioned from the value to the growth phase.

In yet another instance, in 2017, contra fund invested in the IT sector due to its attractive valuations and is reaping the benefits this year. Typically, for any sector or company, we normally assume a turnaround period of three years. Today, in the current scenario, we expect a cyclical recovery in companies belonging to financials, industrials and consumer discretionary. We are also overweight sectors/companies which are beneficiaries of currency depreciation. We have also added weight to gas-pipeline utilities, given their attractive valuations.

Not every stock story plays out the way we want it to. Please share some examples of stock bets that did not work. What did you like about them, why didn't they work, how long did you wait for them?
Invesco India Contra Fund endeavours to identify growth companies when they are in the value phase of their life cycles. Not all companies are successful in their transition from value to growth and many times external environment too needs to be conducive to help companies transition into the next phase.

Between 2012 and 2016, we have had a difficult time with turnaround candidates as companies were finding it difficult to turn around in the wake of deteriorating external environment. This was especially true for some regional banks and corporate banks where every time we felt asset-quality challenges were peaking, the next year turned out to be even worse. As stated earlier, we generally assign a period of about three years to a turnaround company and if it doesn't turn around even after three years, we acknowledge it to be a weak investment argument.

When there is so much investor money chasing stocks, does it become necessary to upgrade your price targets and take a more optimistic view of the businesses?
There are times when valuations in the market are absolutely cheap. But these are generally also the times when news flow is at its worse. Then there are times when absolute bargains are not available but even during these times one can focus on relative cheapness and identify good investment ideas. For instance, last year when stocks of mid-cap and small-cap companies were clocking new highs, the information technology (IT) and pharma-sector companies were making new lows.

Again, this year, as stocks of some large-cap companies are making new highs, value is gradually emerging in some good quality mid and small caps. In fact, in an expensive market, we aim to avoid mistakes such as chasing momentum and going down the quality curve in search of absolute bargains. Rather, a balanced approach towards risk and reward pays rich dividends in the long run.