The power of compounding | Value Research https://www.valueresearchonline.com/stories/4007/the-power-of-compounding Compounding earnings can skyrocket small investments. We tell you how here

Compounding earnings can skyrocket small investments. We tell you how here

Sachin Tendulkar started playing cricket at the age of 16. At 29, he has already amassed over 12,000 runs in one-day matches. On the other hand, Robin Singh joined the Indian team at the age of 25 and has retired now. He could manage only 2,336 runs in one-day matches. Before you begin to wonder if we have lost our marbles, let us tell you what we are trying to arrive at here. The idea is simple: the earlier you start investing, the more likely it is that you would end up making more money. While runs scored in cricket don't multiply automatically, investment does. Surprised? Well, the fundamental principle of compounding helps you realise this.

Let's see how the concept of compounding works. Suppose Sachin started investing Rs 2,000 per year at the age of 19 and when he reaches 27, he stops investing and locks all his investments till retirement. Robin, however, doesn't make any investment till he is 27. At 27, he starts investing Rs 2,000 a year till the age of 58. The adjacent table tells you how their investments would turn out when they both are 58, assuming that the growth rate is 8 per cent per annum. The results are eye-popping (see table below). 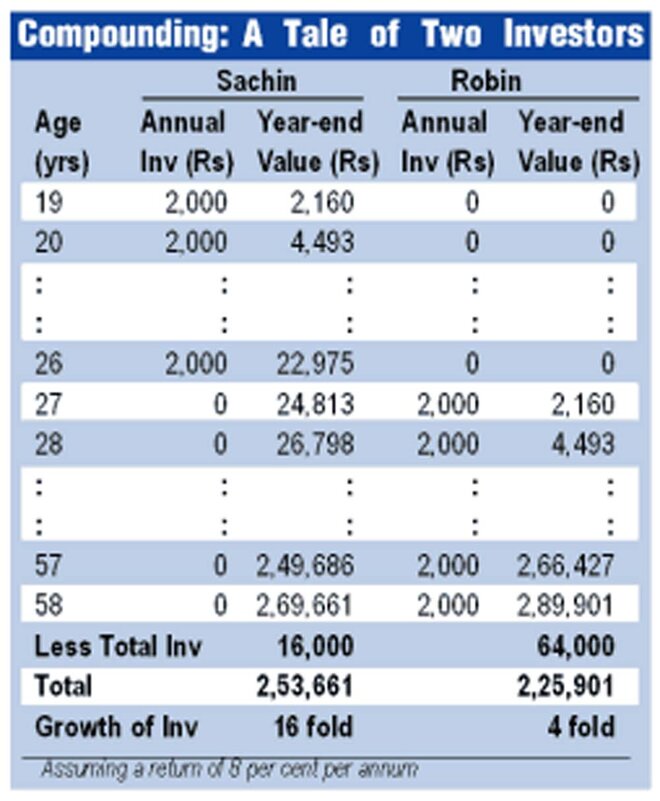 What is compounding? Benjamin Franklin once wrote somewhere: '''tis the stone that will turn all your lead into gold. Remember that money is of a prolific, generating nature. Money can beget money, and its offspring can beget more.''

Compounding is a simple, but a very powerful concept. Why powerful? Because compounding is similar to a multiplier effect since the interest that is earned by the initial capital also earns an interest, the value of the investment grows at a geometric (always increasing) rate rather than an arithmetic (straight-line) rate (see graph below). The higher the rate of return, the steeper the curve. For example, at an annual interest rate of 8 per cent, a Rs 1,000-investment every year will grow to Rs 50,000 in 20 years. While at a 10 per cent rate of interest, the same investment will fetch you Rs 63,000 in 20 years. So, it is quite clear that a 2 per cent difference in the interest rate can make you richer or poorer by Rs 13,000. And, by staying invested for a longer period, your capital will earn more money for you.

Basically, compounding is a long-term investment strategy. For example, when you own a mutual fund, compounding allows you to earn interest on your principal. Compounding also occurs when you re-invest your earnings. In the case of mutual funds, this means re-investing your interest or dividend, and receiving additional units. By doing such a thing, you are earning a return on your returns and the principal. When the principal is combined with the re-invested income, your investment will grow at an increased rate.

The best way to take advantage of compounding is to start saving and investing wisely as early as possible. The earlier you start investing, the greater will be the power of compounding.

This article was first published in May 2003.