Gaining currency bit by bit | Value Research https://www.valueresearchonline.com/stories/34532/gaining-currency-bit-by-bit/ Cryptocurrencies, like Bitcoin and Ethereum, are becoming serious investment options, but their future course is not without challenges Cryptocurrencies, like Bitcoin and Ethereum, are becoming serious investment options, but their future course is not without challenges What is a currency? Anything that is accepted as both a medium of exchange and a store of value. It could be anything - paper, gold, silver, cowrie shells, etc., have all been used. Even strings of computer code with no physical existence could be acceptable.

Indeed, digital cryptocurrencies, like Bitcoin and Ethereum, are just strings of computer code. Digital cryptocurrencies like these have caught on like wildfire in the past year or two. Bitcoin has seen its market value rise to $70 billion equivalent as its popularity has grown exponentially. Ethereum has jumped a mind boggling 2,300 per cent in value versus the USD over the last 12 months and its market value now is $28 billion.

Compare Bitcoin to normal currency. Notes have serial numbers, security printing design, etc. A note is issued by a central bank. Two strangers can conduct a transaction using a note because they trust the central bank. The note can be dematerialised in a banking transaction. The money supply can be manipulated as the central bank chooses.

Fractional-reserve banking magically improves money efficiency, just by circulating. Say, a bank accepts a deposit of Rs 100 and lends out Rs 90, keeping Rs 10 in reserve in case the depositor wants it back. The borrower of that Rs 90 invests Rs 80 in a business, which then buys Rs 80 worth of goods. The seller of those goods puts that Rs 80 back in the bank.

The same notes have done work multiple times due to circulation. The bank now has Rs 180 on its books as if by magic. It can retain, say, Rs 8 and lend out Rs 72 more and the process repeats. Fractional-reserve banking is crucial in the way that it generates economic activity as money circulates. The higher the velocity, the more the activity.

Cryptocurrencies are harder to understand conceptually. Their existence depends on purely mathematical concepts, not on central banks. They take the definition of currency to the logical limit. Bitcoin is 'mined' by solving complicated maths puzzles using computers.

Each 'coin' is a string of a cryptic computer code (it can be broken into fractions). The money supply is limited and increases in an exactly predictable mathematical fashion and there is an absolute upper limit to the money supply. There is no central bank control. The 'coinage' is maintained by a peer-to-peer network. The existence of every coin and every transaction ever made is recorded in an open transaction ledger called the blockchain.

The blockchain is a fantastic concept. It allows two anonymous strangers to conduct a transaction using a bitcoin - a computer code - in a manner which doesn't need a central bank. A blockchain copy can be downloaded by anyone and anyone can help to verify it. Every time a transaction is made, Bitcoin users check the blockchain for some key things. They check if the specific coin exists, if it's in the right place and if it's being being used in two transactions at the same time. Once a large majority of users confirm these details, a transaction is verified and recorded on the blockchain. So, the blockchain is constantly updated. (A technological change has led to a split in the Bitcoin protocol but it has just made transactions quicker.)

The blockchain enables privacy. Bitcoins are held in anonymous digital wallets, which could be owned by anyone. So long as the blockchain verifies the transaction, it's fine. So the blockchain and a peer network replaces the central bank.

In practice, Bitcoin exchanges demand some KYC but it's relatively hard to discover ownership if trades are layered. Bitcoins are accepted as legal currency in Japan and Korea and a few other nations. In other nations, Bitcoins are treated like virtual art works. Some merchants accept bitcoin, many don't. It is easily changed into currencies, however, and, therefore, often used for cross-border transfers. In China for example, traders buy bitcoins and then sell them for USD/euros.

India generates large bitcoin volumes already and the volumes are set to increase since there are new exchanges opening up. In the last ten weeks, rupee volumes of the bitcoin trade have averaged out at about Rs 3.5 crore, according to https://coin.dance/volume/localbitcoins/INR#. (See Figure 1) 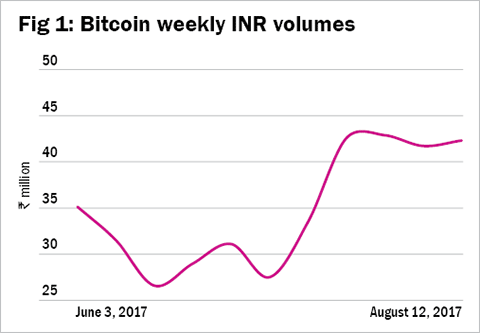 Several exchanges accept rupee payments and more exchanges are enabling themselves for Indian regulatory norms and KYC. In India, cryptocurrency is in a legal black hole. It's not defined as a currency in India. Nor is it considered a commodity. So, at the moment the trade has few restrictive controls, though there is talk of SEBI regulations and GST imposition.

The last year has been stunning for Bitcoin. As mentioned above, it's been even better for Ethereum. Compare this to gold, for instance, and Bitcoin investors have done way better. (See Figures 2, 3, and 4) 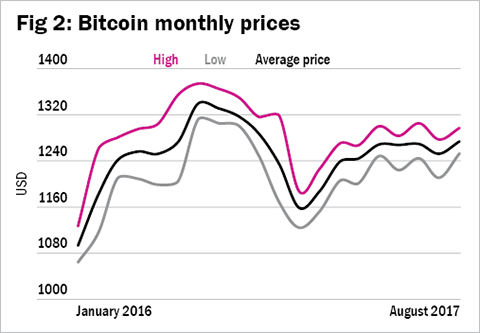 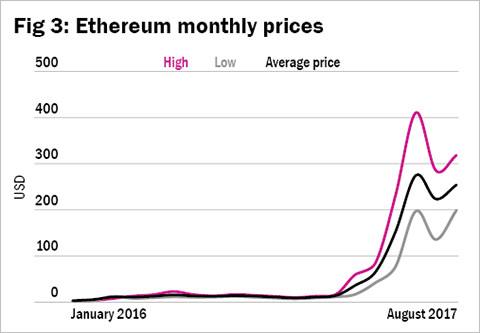 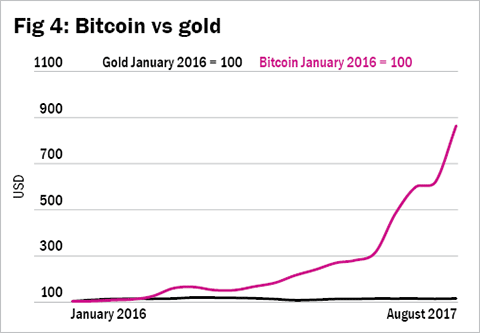 In fact, the comparison to gold is useful for several reasons. Anybody who trades Bitcoin is doing so, because it's seen as a store of value. There are other similarities with gold. Gold isn't interest-bearing. Nor is bitcoin. Bitcoin loans are cumbersome and generally need to be denominated in other currencies, if at all it's done. That's because the standard fractional-reserve banking concept cannot apply to a currency with a strictly limited money supply and a blockchain-type verification system. A Bitcoin cannot be used twice at the same time.

Gold is heavy and cumbersome but it can be digitally dematerialised. Bitcoin is entirely digital. So long the investor recalls his passwords, he can log in and buy/sell bitcoin from anywhere.

This happened during the Greek euro crisis. It happened in China during the 2015 market crash. It happened all over the world last year with a push imparted by Brexit and by Donald Trump's presidency. It may be one reason why there's been growing interest in Bitcoin in India since November 2016.

Are Bitcoin and other digital cryptocurrencies in a bubble? Yes, undoubtedly. Markets have trouble evaluating new assets. Remember the global internet bubble? That happened because investors got excited by the promise of new businesses but lacked the knowledge and metrics to make sane earnings-based valuations of such businesses. In a sense, digital cryptocurrency is even more difficult to evaluate - how do you value new global currencies?

The internet bubble eventually collapsed . But those who bought Amazon, Facebook, Google and Netflix, etc., have done well for themselves. Bitcoin and other cryptocurrencies could pay in the same way. Like gold and like internet businesses, it may be worth a small exposure to Bitcoin/Ethereum, etc., as part of a long-term asset allocation plan. It's like holding gold. You know it won't earn interest and it may not appreciate if global variables are wrong. But it is a hedge.

The real dangers with crypto-currencies lie in their unregulated nature. Apart from cross-border trades, (which governments don't like), crypto-currencies have been used to fund too many crimes for comfort. Ransomware demands are always crypto-denominated. So are dark web trades in illicit goods like drugs and weapons.

Sooner rather than later, global central banks and market regulators will have to take stances on these new instruments. Those stances could be harsh and, thus, drive these cryptocurrencies into deep discounts. For what it's worth, I don't think trading in cryptocurrencies can be stopped since the market is too large and trading them is too easy. But curbs and controls could certainly affect valuations.

That's a large risk but if you can stomach it, consider the fact that rational asset allocations may involve taking small exposures to gold, silver and diamonds. Sometimes alternative investments involve buying art. Think of cryptocurrencies as something in between art and precious metals.