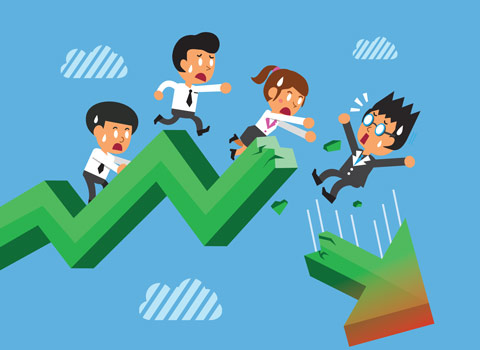 For investors and fund managers of most debt funds, February's events were a bit of a shock. Moreover, this shock was entirely self-inflicted and results from the flawed approach that fund companies (and to an extent, investors) have towards debt fund investing. In these supposedly stable fund categories, all debt funds made large losses on February 7th, the day the RBI Governor announced that the central bank's monetary policy committee had decided to hold interest rates. Some funds lost up to 2.6 per cent, which is what they would otherwise expect to earn in two to three months. Except for liquid funds, which are constrained by SEBI rules to invest entirely in very short-term debt, every type of fund lost money. Without a doubt, these funds will not be able to make up this one day's losses and their investors will be denied the kind of stable and predictable returns that they expect from debt funds.

After the event, almost all debt fund managers sent out explanations to analysts and investors which tried to justify the losses. Most of them spun rather long and elaborate tales in these explanations but it all boiled down to a simple confession: They had guessed (or predicted, or conjectured--it doesn't matter which) that Governor Urjit Patel and his Monetary Policy Committee would reduce interest rates. Those guesses were utterly wrong.

When interest rates drop, the market price of bonds with long residual maturities rises. The longer the time remaining before a bond's redemption date, the more its price rises. It seems that every single debt fund manager in India decided that RBI would lower interest rates. To take advantage of this, they loaded their funds with longer maturity bonds. This buying binge of long-term bonds itself boosted their market price. When the RBI did not act as per the so-called 'consensus view', the prices of such bonds fell sharply, resulting in large losses for these funds' investors.

Readers should note that this kind of a thing happens all the time in equity, where it's perfectly fine. If an equity investment manager makes a wrong call on whether something is a good investment, that's the way things are. As they say in cricket, it's a percentage shot. However, debt investing is not supposed to be a percentage shot, so why do fund managers invest as if it is? Instead of betting heavily on their ability to predict what Urjit Patel would do, it would have been better for investors if fund managers had taken a conservative view and decided that anything could happen.

This is not a unique event, some version of this happens almost every time the RBI does something unexpected. The root cause of such shocks is the way debt funds are marketed. What is inherently a capital preservation product is sold as a returns-maximising product. The potential investor is told that instead of choosing a fund for stability and predictability, they can chase perhaps one per cent extra returns. That's all there is at stake--the difference between the worst and the best funds is rarely more than that range. It depends on how you do the maths. You can listen to a sales pitch that says that a fund that has an annual return of 11 per cent increases your earnings by 10 per cent compared to one that has returns of 10 per cent. Or, as is often the case with the corporates who actually use such funds, you had Rs 10 crore to park for maybe four months and it makes no material difference whether it became Rs 10.40 crore or Rs 10.44 crore. The important thing should be that in that effort to earn that extra bit, you didn't end up with a loss.

However, it does seem that both on the investor side, as well as the fund company side, there are way too many people who have lost sight of the larger picture and are focussed on excessive fine-tuning and optimisation. The fund industry seems universally committed to creating an ever-larger variety of funds which serve no purpose except to bamboozle the investor into looking at frills rather than the core of the product. Unless, there's a fundamental change in this approach, events like February's disaster will continue to happen. Unfortunately, it does not look as if such a fundamental change will happen voluntarily.

In the May 2017 issue of MFI, we have presented a 5-point checklist that debt fund investors should go through before investing.