What to do in the market now | Value Research https://www.valueresearchonline.com/stories/32818/what-to-do-in-the-market-now/ Though the Indian market looks overvalued, money can still be made in quality stocks over the long term

What to do in the market now

Though the Indian market looks overvalued, money can still be made in quality stocks over the long term 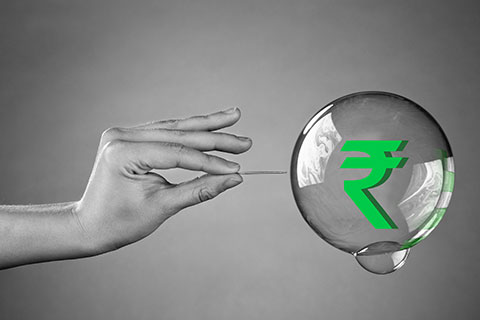 In fact, correcting for the inherent survivorship bias in the index (since by definition, a re-balancing is affected semi-annually to churn out the losers) points to an even bleaker RoE picture. After attaining a peak of 22 per cent in FY07, the BSE100's RoE corrected for survivorship declined to 10 per cent by FY16.

Optimists argue that this RoE decline is cyclical. To test the veracity of this argument, my colleagues at Ambit stripped out cyclical sectors (industrials, materials, energy, consumer discretionary, utilities and financial services) from the standard BSE100 RoE as well as the corrected BSE100 RoE. This adjustment yielded limited relief to India's consistently declining RoE. The BSE100 ex-cyclicals corrected for the survivorship bias in fact has been trending downwards for nearly two decades! After attaining a peak of 27 per cent in FY1999 the corrected BSE100 ex-cyclicals' RoE trended downwards and was recorded at 15 per cent in FY16. In fact, amongst non-commodity based emerging markets (EMs), the compression in India's RoE has been amongst the highest.

What drove this brutal RoE compression?
Decomposing India's RoE into its three constituents (namely net-profit margins, asset turnover and financial leverage) shows that the slide in RoE in India has been mainly driven by declining profit margins (and to a lesser extent by declining asset turnover). Even as profit margins for the corrected BSE100 declined from the peak of 10 per cent in FY07 to 6 per cent in FY16, financial leverage increased from 2.3x to 2.7x and the asset-turnover ratio declined from 0.9x to 0.6x.

A cross-sector analysis suggests that an increase in competitive intensity in all probability drove the profit-margin compression in India. We use the coefficient of variation (CoV) in the RoE of a particular sector as a measure of the degree of competitive intensity, whereby a high CoV indicates the sector's RoE being dispersed and, hence, the existence of high competitive intensity and vice versa. Unsurprisingly, this analysis suggests that there exists an inverse correlation between the 'extent of drop in RoE' in a sector and the 'increase in the CoV of RoE' over FY07-16.

Despite declining RoEs, India is richly valued
While the BSE100's RoE has fallen since FY07, its trailing 12-month P/E currently trades at a 22 per cent premium to its long-term average and is currently trading at a 52 per cent premium to the MSCI EM P/E. Optimists argue that India's trailing P/E of BSE100 is 'optically inflated' as the earnings cycle is supposedly at its bottom. Thus, according to the bulls, a depressed 'E' is optically making India's P/E look elevated.

However, there appears to be limited fundamental basis to this argument. The RoE of defensive sectors (namely IT, consumer staples, healthcare and telecommunication services) currently stands at a six-year high of 20 per cent. These sectors have not experienced any RoE compression. Hence, the 'optically inflated P/E argument' clearly does not apply to these sectors. Furthermore, there appears to be a limited basis for arguing that the RoE of these sectors, which is already at a six-year high, will rise further.

Metals and mining stocks (including energy, metals and mining, steel, aluminum, metals, glass containers, copper and commodity chemicals) on the other hand have seen their RoE come under profound pressure as the commodity super cycle came to an end in 2011. The RoE of this sector then nosedived from 26 per cent in FY07 to a mere 9 per cent in FY16. Given that this sector's RoE is closely linked to the global commodity cycle and given that the global commodity cycle is unlikely to turn soon (unless China recovers suddenly), it appears highly unlikely that this sector will be able to drive an RoE improvement at the market level. Therefore, barring the possibility of a sudden and significant recovery in profit margins, the Sensex is increasingly looking fully valued.

Navigating the Indian market
If you buy the Indian market when it's trading well above its long-term average trailing P/E, it will be difficult for you to generate healthy returns over the next 12 months. However, as soon as you move to the stock-specific level (rather than the market-level) and look at horizons longer than a year, the picture changes. A time-series analysis of market data suggests that there exists no significant correlation between starting-period valuations and share-price returns for horizons longer than a year. In other words, valuations do not have any significant bearing on returns for periods longer than one year.

Hence, investors looking to generate market outperformance over a holding period exceeding one year should focus on quality franchises with strong underlying fundamentals rather than basing their investment decisions on current valuations.