A near-debt experience | Value Research https://www.valueresearchonline.com/stories/32359/a-near-debt-experience/ A high public-debt ratio could mean the end of the long-term Indian story 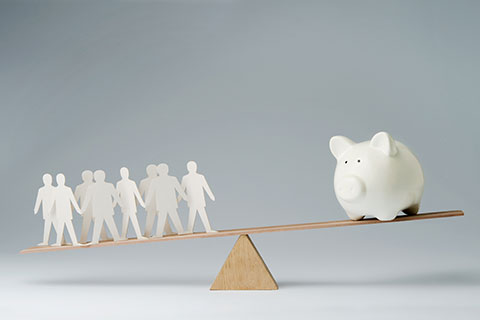 There are ten countries that offer citizenship against "investment", i.e., if you bring a certain amount of money into the country, you are entitled to citizenship within a certain time frame, ranging from immediate to 7 years (for a Green Card, US). Of the ten, only Australia is at the bottom of the debt tables, meaning that it needs people rather than the money. The rest of the 9 are among the 42 countries that are above the world average for their Public Debt Ratios (64% of GDP): the US, Singapore, UK and minor countries like Malta, Grenada, Cyprus, Dominica, St. Kitts & Antigua.

India is well below the world average, about 20 ranks, although some of those countries are too small to count. All the other BRICS are below the world average. If you take this ratio to be some surrogate for Free Cash Flow (FCF), while outstanding debt is what has to be serviced from this FCF, you get some idea of the debt servicing capability of major countries (like how a company uses FCF to service and repay debt). Of course, you have to take the simplifying assumption that, say, a quarter of the tax can go to servicing and reducing debt. So the relevant ratios for some of the major economies are given in the table below. 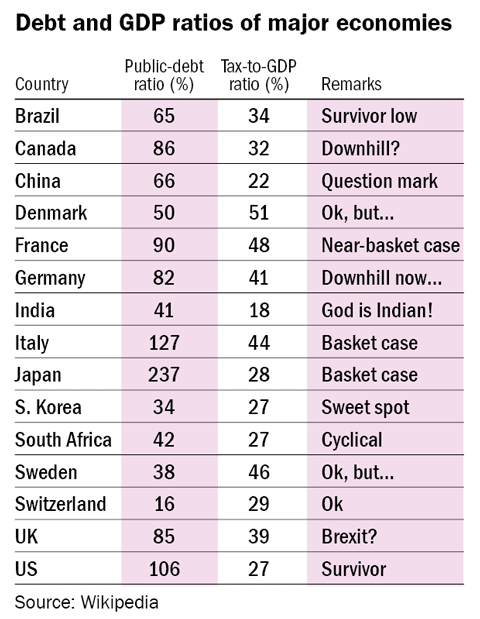 From here, this article turns into pop research. There are too many variables from now on, but this table is still useful. For example, the growth rates of the respective economy will impact the Public Debt Ratio, i.e., a fast-growing economy will automatically reduce its Public Debt Ratio, whether from real growth or from inflationary growth, so nominal growth is a better indicator of the direction of where the Ratio is headed. So low-inflation, low-growth Japan will probably deteriorate into a basket case, while high growth-high inflation India will see a reduction in its public-debt ratio.

The ability to push up the tax-to-GDP ratio is also a big factor. European countries like France and Germany are stretched to the limit, with big welfare programmes limiting their ability to reduce debt (Italy is an extreme example), while India is again at the bottom of the table. If agriculture reduces in share of the economy, the tax:GDP ratio is now headed towards to 20%, maybe a tad higher. This further gives India the ability to reduce its Public Debt Ratio.

Some countries, which are low inflation (such as China) could inflate away their debt, although that would reduce discretionary surplus in the hands of their population, which is the major engine of their famed consumer growth engine. In fact, that is the major dilemma facing the Chinese government. If they inflate away their debt, like the Congress governments did in India, they will be appropriating the surplus in the hands of the consumers, and will be back to depending on Investment Demand for growth, which is what got them into this hole in the first place.

The number and size of welfare programmes is another big factor, which has strait-jacketed the European economies particularly, with an inability to both drop their taxes or generate enough surpluses after paying interest. A young worker in these economies will see his back broken as he pays taxes but is denied the benefits of welfare, which can only come if immigrants come into the productive economy. That seems an unlikely prospect, given where the politics of Europe is headed just now.

You only have the ability to change course, while you are on the fast-growth trajectory, when you are a developing country. As the country matures, and its economy moves into middle-income, it slows down. At that time, it must choose what it wants to pursue, stability or growth. China is a recent example of a country that has gone into middle-income, but chose a debt binge to keep its growth rates high. This will eventually slow down Chinese growth rates, maybe even gving them a 'a lost decade' or two.

Rarely, some countries (Denmark, Sweden, Switzerland, South Korea) will have high income, low debt and high taxation regimes. This is a conscious path, where public goods are rated higher than private goods. Most large, populous countries end up with high debt, high taxes and stagnant to falling income (US, most of Europe, China, Japan). It is the poorer big economies, (Russia, South Africa, Brazil, India) who have lower debt and high economic growth.

If you consider each large country to be a crowd, you should understand that momentum takes the country into the least painful option, which is that they will always choose to use debt to pump demand, whenever they fall short of it (i.e. demand). And that means indebted Govts and falling credit ratings. The exceptions have small populations, and big sustainable competitive advantages in niche industries that they have been able to maintain even as they have got rich and their currencies have got expensive. It is a variant of the 3-generation rule that operates in families ("from shirtsleeves to shirtsleeves in 3 generations"). As you get more affluent, you take softer options as a matter of habit, resulting in daddy (i.e. the government) getting poorer.

This is where the Indian government has used its recent bounties (oil prices mainly) to good effect, and brought down the public debt ratio (inflation in the Congress years has been the other contributor), conserving its Balance Sheet. If it uses this firepower like a good investor, it will be able to maintain its growth trajectory longer than China. One good place is to bring down the cost of critical inputs and then wait for the private sector to use those inputs....cheap renewable power, good roads/ other infrastructure, telecom, education and other social infrastructure. And get out of industry in general, except the core infrastructure industries. The more patient capital it puts into private hands, the better it is for everyone.

Meanwhile, it should focus on keeping its Public Debt Ratios low, and preserving its firepower, going slow on welfare handouts.....even as I write this, I know that it is impossible. At even moderate levels of per capita income, India will end up with high Public Debt Ratios. So watch this ratio to signal the end of the long-term India story.