Why the dollar has survived | Value Research https://www.valueresearchonline.com/stories/31730/why-the-dollar-has-survived/ In spite of the many doom-and-gloom prophecies for the dollar, it has remained unchallenged in the world economy

Why the dollar has survived

In spite of the many doom-and-gloom prophecies for the dollar, it has remained unchallenged in the world economy 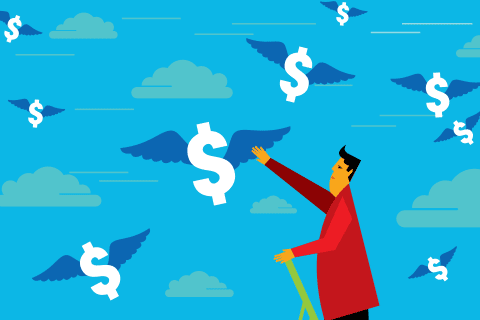 I first started writing about the financial crisis in August 2008. This was around the time the world at large first started to hear, talk and write about the subprime crisis.

Pretty soon, the subprime crisis looked like becoming a dollar crisis. A whole host of analysts, experts and economists, started to believe that the subprime crisis, which later became a huge financial crisis, would lead to the end of the dollar as the global reserve currency.

The logic was simple. The United States economy was in trouble and the economic growth had come to a standstill. In order to revive economic growth, the Federal Reserve of the United States, the American central bank, decided to print money (rather create it digitally) and flood it into the financial system, in order to drive down interest rates, in the hope of getting consumption going again. The idea was that at lower interest rates people would borrow and spend more and this would help in reviving the American economy.

A whole host of economists and experts, predicted that all this money printing would lead to high inflation as more and more money would chase the same amount of goods and services. This would eventually destroy the dollar. To be honest, I was also in the dollar destruction camp for a while, but now I am not so sure. For the period this economic theory prevailed gold prices started to go through the roof touching $1900 per ounce (one ounce equals 31.1 grams).

It was also said that the liabilities of the American government were so huge that it would eventually destroy the dollar. This was a huge reason for worry given that the dollar is the international reserve currency and it is also the currency in which maximum amount of global trade happens.

As Barry Eichengreen writes in the Exorbitant Privilege-The Rise and Fall of the Dollar: "The dollar remains far and away the most important currency for invoicing and settling international transactions, including even imports and exports that do not touch U.S. shores. South Korea and Thailand set the prices of more than 80 per cent of their trade in dollars despite the fact that only 20 percent of their exports go to American buyers. Fully 80 percent of Australia's exports are invoiced in dollars despite the fact that fewer than 6 percent are destined for the United States."

Most commodities including oil are bought and sold in dollars. Around 85% of foreign exchange transactions are carried out in dollars, points out Eichengreen. "It accounts for nearly half of the global stock of international debt securities. It is the form in which central banks hold more than 60 percent of their foreign currency reserves," he writes.

And it's time to ask why things have turned out the way they have. Yuval Noah Harari has the answer in Sapiens-A Brief History of Humankind. As Harari writes: "Dollars have value only in our collective imagination. Their worth is not inherent in the chemical nature of...paper, or their colour... In other words, money isn't a material reality - it is a psychological construct. People...trust the figments of their collective imagination. Trust is the raw material from which all types of money are minted."

And people still trust the dollar because dollar exists in their collective imagination. This collective imagination is holding dollar together. As Harari writes: "The dollar...and the United States of America exist in the shared imagination of billions, and no single individual can threaten their existence. If I alone were to stop believing in the dollar...it wouldn't matter. These imagined orders are inter-subjective, so in order to change them we must simultaneously change the consciousness of billions of people, which is not easy."

The dollar as of now has what Eichengreen calls the "advantage of incumbency". As Eichengreen writes: "The dollar has the advantage of incumbency. Consider an exporter deciding in what currency to quote the prices of his exports. Exporters want to limit fluctuations in their prices relative to those of competing goods in order to avoid confusing their customers. If other exporters are invoicing and settling their transactions in dollars, each individual exporter has an incentive to do likewise. And continue doing so...Since it pays for exporters of financial services, like exporters of merchandise, to avoid confusing their customers, they, too, will price their products in the same currency as their competitors."

This happens because of the dollar existing in the shared imaginations of people. And to break this is not easy. It is worth asking why. As Harari explains: "A change of such magnitude can be accomplished only with the help of a complex organisation, such as a political party, an ideological movement, or a religious cult. However, in order to establish such complex organisations, it's necessary to convince many strangers to cooperate with one another. And this will happen only if these strangers believe in some shared myths. It follows that in order to change an existing imagined order, we must first believe in an alternative imagined order."

The world at large does not have an alternative imagined order to the dollar as of now. The euro started with great promise, but Europe is now in a bigger mess than the United States. Japan has been in an economic stagnation for the last 25 years and that rules out the yen taking over from the dollar, as the international reserve currency.

That leaves us with the Chinese yuan (or the renminbi as it tends to be called in the Western circles). The Chinese economy as of now is just not open enough to be able to project the yuan as an alternative to the dollar as an international reserve currency or the currency in which a significant portion of the global trade is carried out. And that leaves us with the dollar.

This column appeared in the March 2016 Issue of Mutual Fund Insight.