IPOs fail Investors | Value Research https://www.valueresearchonline.com/stories/27405/ipos-fail-investors/ More than 60 per cent of the issues that hit the primary market in the last five years are still in the negative territory

IPOs are not an avenue for quick bucks anymore. More than 60 per cent of the issues that hit the primary market in the last five years are still in the negative territory. The number of issues in the primary market has dropped significantly in the recent past as most promoters have become wary of tapping the market due to its dismal performance. Tougher IPO norms introduced by the Sebi also had an adverse impact on the market.

The period of 2010-2012, three succeeding years after the financial crisis, turned out to be a dark period for IPO investors. This period has witnessed as many as 116 IPOs and 70 per cent of them lost around 50 per cent of their market value. Some of these companies were later embroiled in various scams and the Sebi has debarred them from further fund-raising activities. And four of these companies do not trade on the bourses anymore.

Sizes and number of IPOs since 2010 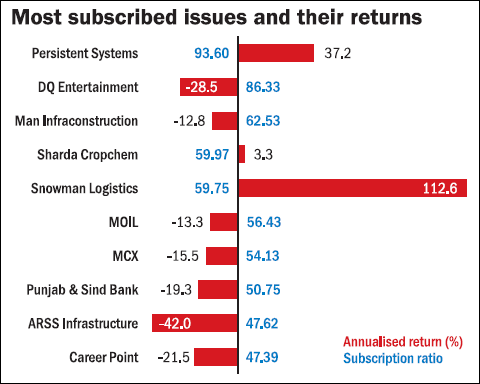