Infrastructure Funds are Making a Comeback | Value Research https://www.valueresearchonline.com/stories/25307/infrastructure-funds-are-making-a-comeback/ The performance of infrastructure funds has been on the rise, with many of them posting 25-40 per cent returns

Infrastructure Funds are Making a Comeback

The performance of infrastructure funds has been on the rise, with many of them posting 25-40 per cent returns

Says Yogesh Bhatt, fund manager, ICICI Prudential Infrastructure; “I think this change is largely on expectation that India might have a stable government post the general elections, making investors build a portfolio of infrastructure stocks.” Take for instance the performance of Franklin Build India, which is up 24.25 per cent and Birla Sun Life Infrastructure that is up 19.47 per cent in the past one year.

Rebound triggers
“There is a marked improvement from where we were six months ago. Our nominal GDP growth rate is still at 13-14 percent every year and we need capacities to accelerate the pace of growth. If policy framework favouring faster clearances of projects is built, it would boost the infrastructure sector,” adds Bhatt. 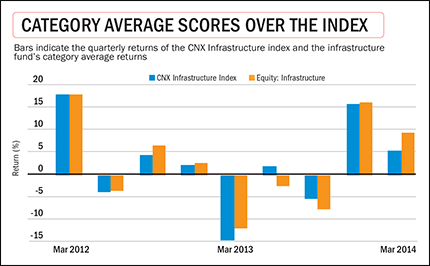 In recent years, fund managers point out that the markets have witnessed more of a consumption driven growth, with hardly any investment led growth. However, with several economic indicators pointing towards a revival of the economy; the infrastructure theme is likely to be the driver. Says Rupesh Patel fund manager of Tata Infrastructure Plan A; “The next government has to kick start the investment side of the economy to put us back on the path of higher economic growth.” Such a move will boost the fortunes of the infrastructure sector and also funds in this sector.