Power Finance Corporation (PFC) is the largest non-banking finance institution (NBFC) in the country in terms of net worth and the size of its loan book. The company primarily lends to the power sector and also other infrastructure projects, with majority of its lenders being centre and state electricity boards and private power companies engaged in power generation, distribution or equipment manufacturers. Strengths
The usual inefficiencies of a PSU have not impacted PFC, and have in fact worked for this company. Two reasons can be attributed for its efficient play. First, PFC enjoys the status of IFC (Infrastructure Finance Company) and exemptions from the regulator like relaxations in the exposure limit gives it a strategic advantage to plan its book profile which is otherwise not available to other banks or NBFCs. Secondly, lending to infrastructure space entitles the company to raise funds through issuance of tax free bonds, which carry low coupon rates. Due to better ratings the bond rates remained low as In FY-13 PFC raised ₹1,276 crore through tax free bond paying 6.88 per cent and 7.86 per cent for 10 years and 15 years thus improving the interest spread. 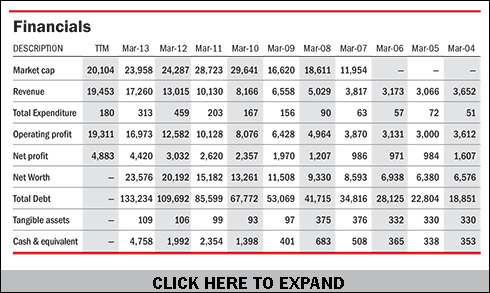 These actions have resulted in PFC's performance comparable with HDFC, the leading player in the industry. Although the lending profile of the two is very different, PFC has maintained a commendable net interest margin of 4.4 per cent as it is better than HDFC Bank and Kotak Mahindra Bank. PFC had interest spread (Difference between the rate at which it lends and rate at which it borrows) of 2.87 per cent in FY-13 and is more than that of HDFC and IDFC. In a sphere where the loan ticket size is very large and reported defaults chances are higher, PFC has maintained a healthy net non-performing asset (NPA) at 0.63 per cent as on March 31, 2013 (down from 0.93 per cent a year ago) and is far better than all of the public sector banks and most of the private sectors banks.

In FY-13, PFC's disbursement was ₹46,368 crore, up 12 per cent from the last year and the loan book has grown by 23 per cent to ₹1,60,367 crore. The power and infrastructure sector is on the priority list of the government and unarguably will continue to be so for the next decade or so, whatsoever the shape of the sector be. Twelfth 5-year plan has the proposal to add power capacity of 88,537 MW and hence PFC will continue to witness such a healthy growth in its loan book. But with the growing net worth also an eye will have to keep on the future NPAs which should be under control like as of now.

Concerns
The biggest threat the company faces is the narrow space in which it operates, exposing it to non diversification risk. For instance, PFC's top few clients account for more than 50 per cent of its loan book. That these clients are state electricity boards is a matter of concern, considering the delay and defaults in payments by these clients. Realising the risks involved with such investments, PFC is diversifying in areas of power generation, power trading through exchanges, advisory services and banking operations through several subsidiaries it has created. However, diversification into power generation can be a threat because the company will have to be on its toes to generate profitability considering the current scenario in the sector. 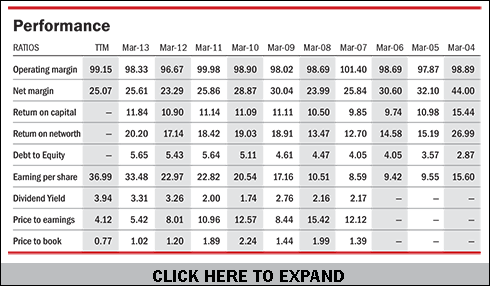 Valuation
PFC valuations are at record lows as it is trading at price to book of 0.86 which is more than 50 per cent discount to its 10-year average of 1.80. The company generated a profit of ₹ 4,883 crore in the last 12 months with a market cap of ₹20,309 crore which converts to the price to earnings of 4.58 again 60 per cent discount to 10 year median of 11.9. Even comparing the peers with the same scale and efficiency, PFC is trading at heavy discount.