HPCL is the fifth largest company on the BSE by market capitalisation. The company sold 30.32 million metric tonne petroleum products in FY13 and has a 20 per cent market share in oil marketing in the country. HPCL operates the country's largest lube refinery that accounts for over 40 per cent of India's total lube base oil production. Its has a 6.5 million metric tonne per annum (MMTPA) refinery in Mumbai and 8.3 MMTPA plant in Vishakhapatnam. HPCL also has stakes in Mangalore Refinery and Petrochemical and is in a JV with Mittal Energy Investments Pte for a 9 MMTPA refinery in Punjab. Strengths
HPCL reported net revenue growth of 5.6 per cent over the previous year in the September 2013 quarter. Much of that growth was on account of better realisations which were higher by 5 per cent (y-o-y) on the back of higher product prices. These higher fuel prices were up in turn on account of the recent diesel price hike by the government. 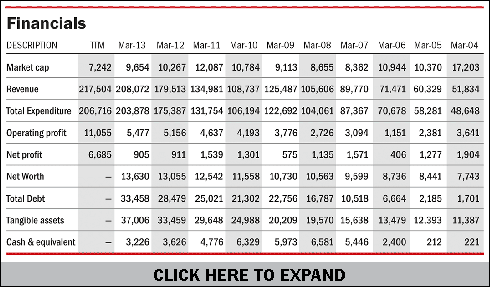 Crude throughput (volumes) at its Mumbai and Vishakhapatnam plants at 3.9 million metric tonne saw a strong recovery of 13 per cent over the immediately preceding quarter. Volumes were up 7 per cent of a year-on-year basis, which was beneficial given the crude price rise.

HPCL's gross refining margin (GRM) in the quarter ended September 2013 stood at $3.9 per barrel. That was higher than the $3.6 per barrel the company had reported in the first quarter of this year. Profits on crude inventory arising out of a rise in Brent crude price is the primary factor that has seen GRMs up. HPCL gains from the government patronage. For instance, it got the cabinet nod to set up the 9 MMTPA refinery cum petrochem project in Rajasthan at a total outlay of ₹37,229 crore. HPCL will own 74 per cent of this project with the balance being owned by the Rajasthan government. HPCL is expected to have the upper hand; it will have the marketing rights and the first right of refusal in purchase of all products produced in the refinery. The plant is expected to come online in four years time.

Concerns
The viability of HPCL depends solely on government patronage. Without a proper government policy there cannot be a steady earnings stream; the wildly fluctuating profitability in the last 10 years is proof of that policy in action. HPCL reported a PAT of Rs 319 crore in the quarter ended September 2013 compared to a profit of Rs 2,327 crore in the corresponding period of the previous year. However, it reported a loss of Rs 1,461 crore in the immediate preceding quarter.

Profits in September was on back of the Government compensation it received. During the quarter, the Government compensated for 96 per cent of the under-recoveries incurred in that period. With general elections near, the prospect of any hard hitting reforms is very low. That could put the well-being of OMCs like HPCL on a low-priority basket.

On a six month period however, the company is still in the red with around five per cent of the under-recoveries still not received from the Government. This ad hoc manner of running OMCs' operations by government is not likely to go away soon. 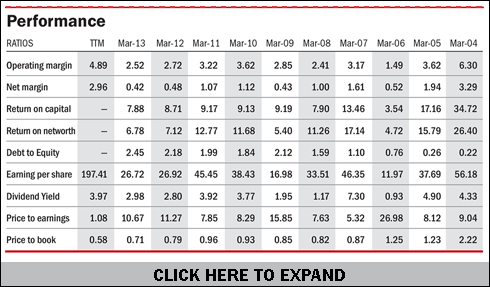 Valuation
HPCL trades at a 1.17x PE, which is one of the lowest valuations the stock has been trading, barring those periods where it reported losses. The company's 10-year median PE ratio stands at 6.74x. The stock has lost 23 per cent in 2013 so far compared to the Sensex which is up 8 per cent. The sporadic manner in which the Government throws money at these companies has affected the earnings predictability of OMCs like HPCL immensely. The current low valuations of the stock in the meantime provide no safety net. Stay away till the new government's policies on OMCs becomes clear.