Raking in the Moolah | Value Research https://www.valueresearchonline.com/stories/23176/raking-in-the-moolah/ Income funds are being lapped up by investors believing that interest rates have seen their peak and would move only downwards now...

Raking in the Moolah

Income funds are being lapped up by investors believing that interest rates have seen their peak and would move only downwards now...

Starting April 2012, RBI embarked on the rate cut route which gained further momentum in 2013 owing to inflation losing its sting and hovering at the level deemed comfortable by the RBI, i.e., WPI in the range of 4-5 per cent.

All this has brought in a windfall for income funds whose assets have zoomed 4 times in the past year (catalyst being the first rate cut in April 2012).

Gilt funds too have benefited from the rate cut scenario though their scale remains low and are way too volatile because the long-term government securities that these funds invest in are illiquid and highly sensitive to interest rate changes.

Dynamism on display
Rate cut by the RBI brought in a windfall for income funds over the past 12 months. But all this had an air of predictability to it: interest rates falling and people locking themselves at a higher rate.

But we can’t always time the markets or commit ourselves to a scenario which is still to pan out. That is where dynamic funds, a category within the income funds, comes in handy.

Rajeev Radhakrishnan, Head-Fixed Income, SBI Mutual Funds, elaborates further: “The perception would be that an income fund will do well only in case of a declining rate scenario, the fact is it is not. SBI Magnum Dynamic Bond fund, a dynamic fund, can potentially be a good fund across all the rate cycles. So somewhere it is perceived as the most riskiest, but it is not.”

And these funds are called dynamic not for nothing. They can move from 100 per cent GOI and corporate debt securities to 100 per cent in money market instruments, depending upon the fund manager’s view of the interest rate direction. Any other income fund, however, will have not have that much leeway in the money market space. This movement across fixed income assets calls for frequent churning of the portfolio depending upon the interest rate view and therefore, also underlines the need to have liquid debt instruments.

This eliminates the need for the investor to time the entry and exit in the income funds The funds achieve this by being dynamic also in their asset allocation and average maturity profiles.

As Amit Tripathi, Head-Fixed Income, Reliance Mutual fund says, “We take the timing decision away from the retail investor by managing the duration risk on the investor’s behalf within a single scheme and the investor can look at it as a life-cycle investment, rather than trying to time the market based on the interest rates direction. However, you’ll never run an income fund like a liquid fund because if the investor has allocated money to the income fund, you are supposed to run some duration – it might be 4 years or it might be 7 years. But it cannot be 0.25 years.”

Dynamic funds sub-category gave an average return of nearly 9 per cent and over 8 per cent during the global financial crisis of 2008 and the slowdown of 2011, respectively. What is pertinent to note here is that interest rates were declining during the second half of 2008 and were again climbing during 2011. So, if one is looking for stability in the income fund space these are go-to funds.

These funds can easily be spotted by investors as they have ‘Dynamic’, ‘Flexi’, or ‘Active’ in their nomenclature. Presently, there are 18 actively-managed dynamic bond funds (with 37,420 crore of assets under management). This is 39 per cent of the total assets under the broader income funds category. 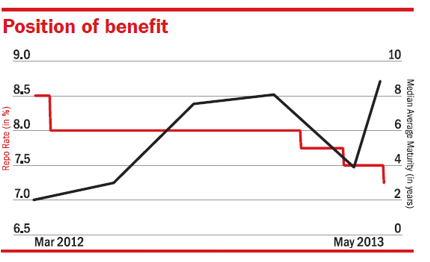