Of late, Infosys has started losing preference among fund managers...

Infosys was and still is the poster boy of the India growth story. It is also the stock that is invested by most equity mutual fund schemes. There are very few mutual fund schemes that do not have investments in this stock, which is to do with their investment focus than avoiding the stock for its numbers. But in recent years, the faith in this bellwether stock among fund managers has started changing. From a time when mutual fund holdings in Infosys were above 10 per cent, before 2001, it has decreased gradually since then. Now, mutual fund investments in Infosys have settled at about 5 per cent.

There have been several debates on the management at the company and its inability to closely forecast its future. For instance, on January 11 this year, the stock price soared 17 per cent on a single day on stronger than expected quarterly profit and upward full year sales forecast. However, the reversal of fortunes was equally visible, when on April 12 the stock price went down 21 per cent on a single day on account of poor fourth quarter results, which were below the market expectations. 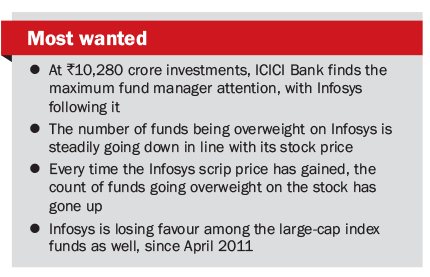 Expectedly, in the quarterly earnings era, the mutual fund holdings in Infosys swing based on the quarterly earnings figure posted by the company. Till 3 years ago, mutual fund managers had been significantly overweight on Infosys. For instance, in the quarter ending March 2010, 73 funds out of the universe of 114 large-cap and large- and mid-cap funds were overweight on this stock. That figure is now reversed with 99 funds being underweight from the universe of 135 funds in these categories. For investors, basing their stock investments on what mutual fund managers do, the writing is clear: trudge with caution.