A Bottom-up Player | Value Research https://www.valueresearchonline.com/stories/20986/a-bottom-up-player/ VST Industries has not only withstood tax shocks but has also climbed the premiumisation ladder deftly…

Christened as Vazir Sultan Tobacco company, Hyderabad-based VST Industries was incorporated in 1930. It is an affiliate of British American Tobacco (BAT), UK, one of the largest cigarette manufacturers in the world, and holds 32.2 per cent stake in VST. It is the third-largest cigarette manufacturer in the country, next only to ITC and Godfrey Phillips India, operating mainly in the lower-end category of the industry. It primarily exports leaf tobacco to cigarettes manufacturers across the globe. The public holds the largest share in the company to the tune of 49.4 per cent. Strengths
VST has a strong presence in low-priced filter cigarettes across the country with major brands such as Charms, Charminar and Moments. With the increasing presence of newer brands like Moments and Special Extra Filter, the company has witnessed significant volume growth during FY10-9MFY12. The company had a significant presence in non-filter cigarette segment until FY08, with around 55 per cent of its revenue (FY08) being derived from that segment. However, it changed its business model from FY09 onwards due to the average 198.3 per cent hike in excise duty on non-filtered cigarettes that year. Hence, currently, the company derives 96 per cent of its revenue from the filtered cigarettes business and only 4 per cent from non-filtered cigarettes. With 88 per cent of revenue being contributed by cigarettes, VST's revenue has grown at a CAGR of 17.2 per cent from Rs 725 crore to Rs 1,602.8 crore during FY07-12 . This growth has mainly been driven by higher average realisations due to a change in the product mix and continuous price hikes.
* VST currently has a volume market share of around 7.5 per cent * It is also the largest domestic exporter of cigarettes to the Middle East and is further strengthening its position by introducing a new brand, Kingston Dual Filters, especially for UAE markets
* The company has been debt-free since FY05 and has been able to finance all the growth through internal accruals along with an average high dividend payout ratio of 69.2 per cent. It has exhibited high return ratios over the years
* VST enjoys a healthy cash flow (from operations) of Rs 151.18 crore in FY12 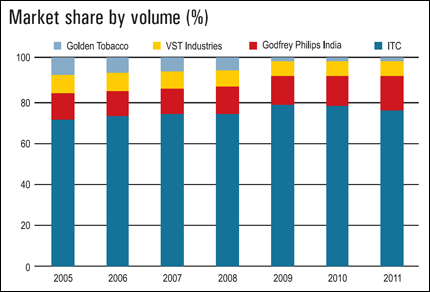 Growth drivers
The company's capacity utilisation is around 35 per cent, so it does not require any new capacity addition going forward. According to the ICICIdirect report, VST's RoCE would improve substantially in future due to its increasing margins, low capex requirement and exceptionally high dividend payout. Moreover, the company's strategy to stick to cigarettes business would result in even higher return ratios.
* VST's operating margin witnessed a contraction in FY09 and FY10 to 8.9 per cent and 10.3 per cent respectively as compared to around 13 per cent in FY08. This was due to aggressive distribution of filter cigarettes to replace non-filter cigarettes, where the company chose to forgo its margins on higher distributor margin. However, since then the company has taken judicious price hikes and simultaneously increased volumes improve margins
* Considering the low level of competition in the price point where it is present and the high volume growth being witnessed, earnings momentum remains strong for it

Concerns
VST faces low competition in its segment but bigger companies can push their products in the low price points category as done by ITC recently. Apart from the growing competitive pressure, the company's business is a play on government policies. From time to time, the government has been putting restrictions on the industry to curb the use of tobacco products. In the past, cigarettes have faced an abrupt rise in excise duties and state taxes. This has hurt volume growth, specifically in 2008. A similar kind of hike on filter cigarettes could damage volume and revenue growth in future.

Valuations
The stock is trading at a P/E of 18.8 which is at a significantly high premium of 87.1 per cent to its five-year median P/E of 10.1. Based on EPS growth of 20.9 per cent over five years, its PEG ratio comes at 0.9 times. VST's strong balance sheet and an equipped management, paves a path for long-term growth but currently its valuations are stretched in terms of P/E, so wait till they improve.