Sugar is sweet. No contradictions to that, right? We all know that sugar is sweet because we have tasted it. However, we can’t say the same for sugar company stocks simply because most of us haven’t tasted, rather invested, in them. But believe us when we tell you this: the sugar sector is on the brink of a healthy turnaround and sugar stocks are expected to get even sweeter.

In the June issue of this magazine, we dissected the sugar sector and came to the conclusion that sugar stocks are good long-term bet. Our analysis of the sector revealed that the past situation of excess supply, both in the domestic and international markets, is coming to an end. And this will benefit the sugar companies.

When we look at the past three-month trend of sugar stocks, the price of sugar futures traded on the NCDEX and the recent production figures, it becomes clear that predicting the positive trend in sugar was nothing short of a slam dunk.

According to recent data released by the National Federation of Cooperative Sugar Factories Ltd, sugar production in India fell by 6 per cent in the 10 months up to July 2008. Output was 26.1 million tons in the October to July period, compared to the 27.9 million tons a year earlier. Furthermore, farmers reduced the area planted to sugar cane by 17 per cent to 4.39 million hectares (11 million acres) as of on August 01, according to the data provided by the Ministry of Agriculture. Besides, farmers find it beneficial to switch over to alternative crops as their yields per hectare are far better than that of sugar cane (refer cover story Wealth Insight: June issue).

In an interview with Value Research, Shankar Sharma, MD, First Global said, “We bought sugar because we believe it is a good long-term story. We think that the world will turn more towards ethanol because of high crude prices and more of it will come from sugarcane rather than corn, which is causing a lot of controversy. This will create some level of shortages in sugar worldwide. So we think that it is a good trade to get into.”

If the demand of the sugar industry of allowing them to export regularly, irrespective of variations in output, is accepted then the resulting low price realisations will further benefit the sugar companies. All in all, sugar stocks make a very sweet long-term bet.

Sugar stocks are also on a rise in anticipation that excess supply situation won’t last long. 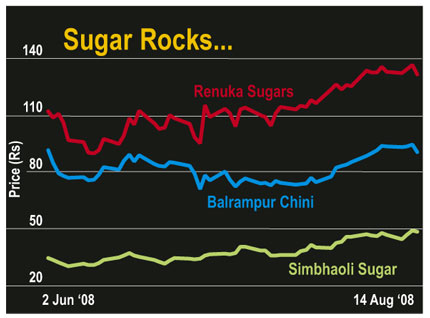