Companies that consistently gave positive returns | GOATs & 3-season wonders | Value Research https://www.valueresearchonline.com/stories/51819/goats-and-three-season-wonders/ With the “who is the GOAT” debate flaming up in the footballing world again, we look at the GOATs of BSE 500.

With the "who is the GOAT" debate flaming up in the footballing world again, we look at the GOATs of BSE 500.

A decade of dominance. 15 years of excellence. With the world cup fever on, the age-old debate is back. Who is the GOAT (greatest of all time), Messi or Ronaldo?

But this had us wondering who are the GOATs of the Indian markets. To find out, we decided to look at companies in the BSE 500 index that have consistently given positive returns since 2012, cementing their position as the GOATs of this decade. 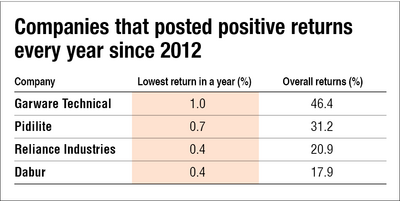 To our surprise, we found four candidates instead of two: Garware Technical Fibres, Pidilite, Reliance Industries and Dabur. However, if we rank them by returns, Garware is the true GOAT (sorry, Dabur fans).

While Messi and Ronaldo's fans are often at each other's throats, they agree on one thing. No other player in the history of the sport has replicated their consistency. They were no one-season wonders like many. And again, this had us intrigued (it is our job to wonder about the market). Who are the one-season wonders of the Indian market? Are there companies in the BSE 500 index that delivered positive returns in just one year since 2012? Well, the short answer to that is no. But we did discover some three-year wonders, companies that posted positive returns in only three years since 2012.