What makes a company compound its free cash flows exponentially

Free cash flow (FCF) is calculated as the difference between operating profits generated by a company for the year and the amount reinvested back into the business through: (a) investments in working capital; and (b) investments in fixed and intangible assets. Every firm typically goes through four stages in its lifecycle: nascent, growth, maturity and decline - see chart 'Free-cash-flow lifecycle of a typical company'. The interplay of key determinants of free cash flow, i.e., operating profits, reinvestments and thus the quantum of free cash flow generation is significantly influenced by the stage of a company's lifecycle as shown in the chart. While from this chart, it may seem a natural progression for every company to move up the free-cash-flow curve, in reality only a small subset of the companies at the beginning of each phase, irrespective of the longevity of their operations, graduates to the next higher phase of the free-cash-flow cycle. In fact, a large number of companies that have had operations for years or even decades are unable to generate operating profits and generate positive free cash flows due to a variety of reasons, including the lack of competitive advantages. At the same time, we have seen several instances of companies that are able to grow operating profits but continue to find FCF elusive. Such companies are typically in capital-intensive, low-margin sectors. In such companies, the high reinvestment in capex and working-capital days is a must for growth and these continue eating away at operating profits, resulting in low or no free cash flow.

The following data points illustrate the challenges associated with the free cash flow journey even for companies with a decent scale of operations and with at least one-two decades of operational history: 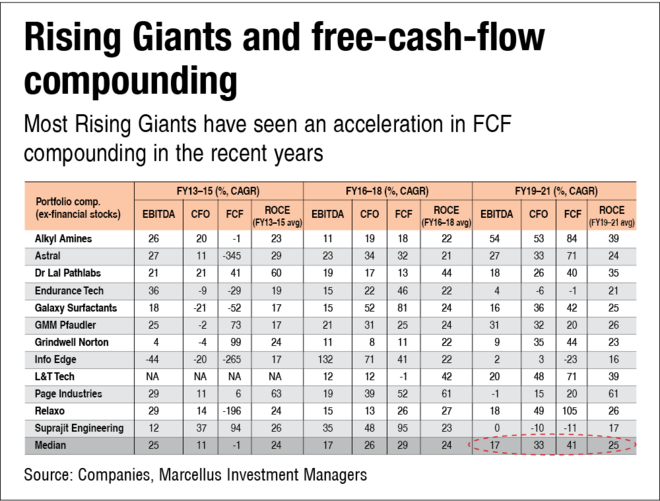 What is even more impressive is that besides the acceleration in free cash flow for Rising Giants, in recent years, this acceleration has come amidst significant challenges surrounding the economic environment like COVID-induced disruptions amidst an economic slowdown. We discuss now the key factors driving such a huge divergence in the Rising Giants' FCF performance vs the broader corporate world.

A networked economy benefits efficient companies: Over the past 10 years (FY11 to FY21), the length of India's national highways has doubled to 136,000 km, implying a compound annual growth rate (CAGR) of 7 per cent1. The number of broadband users has increased from 20 million in FY11 to 687 million at the end of FY20 (CAGR of 48 per cent)2. A decade ago, in 2010, India's airports handled 80 million passengers. The corresponding figure in FY20 was 340 million, implying a CAGR of 16 per cent3. Fifteen years ago, only one in three Indian families had a bank account; now nearly all Indian families have a bank account. As a result of this networking of the Indian economy, efficient companies with strong distribution systems have pulled away from regional and local players. For example, as the economy gets integrated, lending, which was once dominated by regional players, is now seeing the emergence of a few national players with superior underwriting and risk-management capabilities (underpinned by greater investment in talent and technology). Such lenders are part of the Rising Giants portfolio.

Access to and adoption of low-cost technologies: Until about a decade or so ago, using technology extensively to drive revenue growth or business efficiencies was majorly the privilege of large companies. Due to the rise of cloud, mobile and software-as-a-service (SAAS), the technological landscape has evolved significantly over the past decade, resulting in much wider access for smaller companies to world-class technology. The Rising Giants have been at the forefront of adopting these modular low-cost SAAS solutions which are hosted on the cloud (for example, Salesforce, SAP) and IoT (for example, Industry 4.0). The technologies have not only helped drive significant business value on the front end (for example, better customer insights through data mining) but have also helped these companies to improve their working-capital cycles, asset turns, profit margins and hence ROCE.

Capital-allocation initiatives by Rising Giants companies: A persistent economic slowdown in the recent years marked by disruptive events like demonetisation, GST introduction and the recent COVID-19 crisis has only served to widen the gap between stronger and weaker companies. Market leaders helped by their ROCEs are able to generate healthy cash flows and in turn deploy them into strengthening their franchises further through investments in products, people and technology, expanding distribution networks and gaining market share from weaker players.

On the other hand, weaker competitors have been structurally impacted and many of them now face existential issues. Hence, stronger cash-flow-generating companies are able to benefit more from both an economic crisis as well as economic recovery. While it may sound counter-intuitive that investments can result in free cash flow growth (since investments at a practical level reduce free cash flow), well-thought-through investments generate higher operating profits in future than the cash outflow entailed by them initially. Such investments have been a critical driver of Rising Giants' free cash flow growth of recent years.

The power of free cash flows