Which companies in the automobile sector are best tapping the export market?

COVID has led to uneven growth across sectors and economies. At the start of 2021, with the resumption of economic activities, India was thought to have won over COVID. However, the second wave of the virus has again slowed down the economic wheels. Given such an uncertain scenario, companies having exposure to the export markets have benefitted more than those dealing only in the Indian market. And the reason is obvious. Export-heavy companies have managed to earn more revenues from international markets even when their domestic revenues have suffered because of the lockdown, falling growth and other such factors.

The importance of export
Opting for the export route is not a cakewalk. A company first needs to understand consumer insights of each export market well and then it needs to produce quality products at such costs that can justify overhead expenses such as logistics, import duties, etc., and yet be profitable. However, if a company can address these two requirements, then it can derive several advantages of exports. These advantages include a drastic increase in the target size of the overall market, diversification of revenues, natural foreign exchange hedge when raw materials are imported, less reliance on any one product or any one market, qualitative learnings from one market that can be used in another, global brand appeal and so on.

In 2020, India was the fifth-largest auto market, with around 3.5 million units sold in the passenger and commercial vehicles categories. However, two-wheelers contributed around 80 per cent to the total volume of automobiles produced in the country. A huge domestic market, the presence of a robust ecosystem of auto and auto ancillary companies, competitive labour costs and technical know-how have enabled Indian automobile companies to produce quality products and export to low- and middle-income countries in Africa, Latin America and South Asia. Automobile export reached 4.8 million vehicles in FY20, growing at a CAGR of 6.9 per cent during FY16-FY20. Two-wheelers made up 74 per cent of the vehicles exported, followed by passenger vehicles at 14 per cent, three-wheelers at 10 per cent and commercial vehicles at 1.3 per cent.

Auto kings
We checked the export share of Indian auto companies (including both two-wheeler and four-wheeler manufacturers) in the past 10 years. Two companies - Bajaj Auto and TVS Motor - witnessed a substantial increase in their exports. Led by Rajiv Bajaj, Bajaj Auto decided to discontinue its iconic scooter business and focus on producing bikes only during the 2010s. This single-minded focus has paved the way for the company to become the number one exporter of two-wheelers and three-wheelers in India. From 1.2 mn two-wheelers and three-wheelers in 2011, the company exported 2.05 mn vehicles in FY21 mainly to Africa, South Asia, the Middle East and Latin America. In fact, Bajaj Auto accounts for around 60 per cent of motorcycle exports done from India and in FY20, was ranked either number 1 or 2 in 22 of the 79 countries it exported to.

TVS Motor is the second-largest two-wheeler exporter from India. Over the past 10 years, the company has grown its two-wheeler sales from 2.23 lakh in 2011 to 7.6 lakh in 2021. The company mainly exported its products to Latin America and African countries. 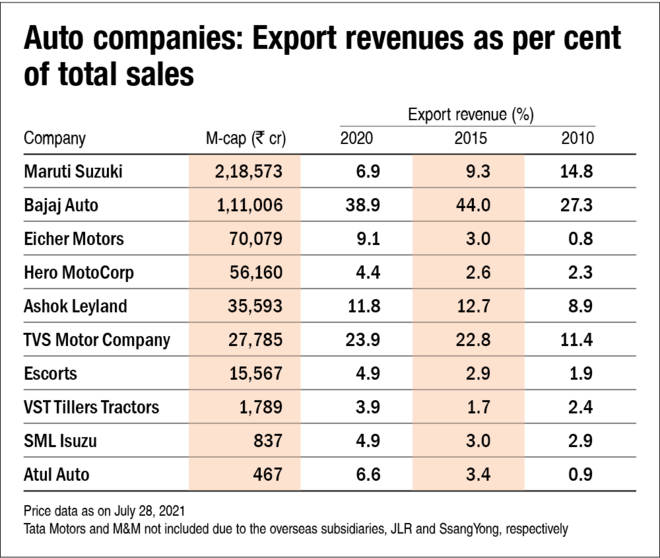 The outcome
Exports give a good hedge to companies during domestic turmoil. In the case of Bajaj Auto, the management expects FY22 to be the best year for exports. However, the export markets are tough to beat and management requires considerable understanding to excel. Bajaj Auto does well in other lower- or middle-income countries but may perform poorly in rich nations. So, when it comes to investing in a company with a high export share, one should evaluate the strategic skills of the company's management.