Three large-cap stocks that have caught the fancy of FIIs | Value Research https://www.valueresearchonline.com/stories/47466/three-large-cap-stocks-that-have-caught-the-fancy-of-fiis Here are the stocks wherein FIIs have recently increased their holdings

Three large-cap stocks that have caught the fancy of FIIs

Here are the stocks wherein FIIs have recently increased their holdings

Over the past few months, foreign institutional investors (FIIs) have sent the Indian markets on a roller coaster ride. The introduction of an additional surcharge in the budget dented their confidence. They reacted by pulling out huge investments from the market. Then came the recent announcement of a slew of measures, including the withdrawal of the additional surcharge and a major reduction in the corporate tax rate. That reinforced their confidence to some extent.

Against this backdrop, we delved into the large-cap space to identify stocks that have caught the fancy of FIIs. We came across the growing interest of FIIs in the country's insurance sector, especially in life insurance companies. All three life insurers listed below feature among the top ten companies wherein FIIs increased their stake the most in the last quarter. 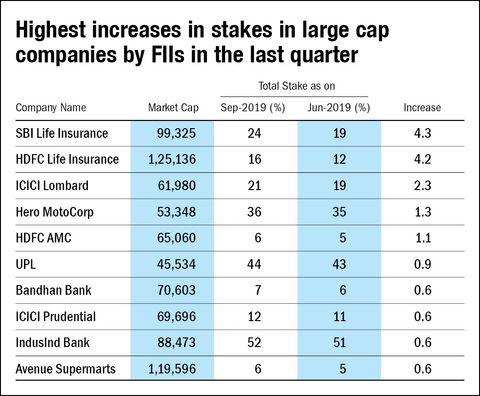 SBI Life Insurance
Starting its journey as a joint venture between SBI and BNP Paribas back in 2001, it offers individual and group insurance plans, including traditional and unit-linked plans. Its products comprise health, annuity, life, pension and variable insurance.

The insurance business has unique parameters of its own to analyse its profitability and value. When it comes to profitability, the value of new business (VONB) and value of new business margin are what reflect the earnings from new policies written during a given period. VONB is the present value of expected future earnings from new policies written during a specified period and reflects the additional value to shareholders expected to be generated through the activity of writing new policies during a specified period. This saw a growth of 33 per cent year-on-year in Q2FY20. The value of a life insurance business is measured by using embedded value which computes future profits from existing policies. The embedded value grew 24 per cent in Q2FY20 as compared to Q2 FY19. Another important ratio is the persistency ratio, which is the ability of the company to retain customers. This has been consistently increasing for the company, which stood at 85 per cent as of FY19 as against 81 per cent as of FY17.

Continuous renewals and improving persistency have enabled the company to reduce costs continuously, bringing down the total cost ratio (as a percentage of gross written premium) to 10.4 per cent in the first half of FY20 as against 12 per cent in the first half of FY19. This actually makes SBI one of the lowest-cost life insurers in the country. However, the company did make a provision for diminution in the value of its investments of 70 crore in Q2FY20 of which, 67 crore was towards its exposure to DHFL.

HDFC Life Insurance
It is a joint venture between HDFC and Standard Life Aberdeen. The company offers a range of individual and group insurance solutions, covering a range of customer requirements, such as health, savings, investment, annuity, etc. By the end of FY19, the company had 38 individual and 11 group products in its portfolio. The company has a wide reach with 412 branches and additional distribution touch points through several tie-ups and partnerships.

Six parameters to look for in a company before investing

How to add stocks to Value Research portfolio manager?

Not the first time