Gauging the quality of capital allocation

Warren Buffett said, "The root of my success is acting rational about capital allocation." A management can spend capital in several ways. It can repurchase shares, pay out dividends, cut debt, invest in some project or buy another company. Whatever it does, as shareholders, we expect managements to allocate capital in such a way that it maximises shareholder wealth.

Return on capital employed (ROCE) helps us gauge the quality of capital allocation. By averaging ROCEs of multiple years, one might want to make sense of how well a company has allocated capital historically. However, this method isn't foolproof. The average ROCE figure hides the quality of 'incremental' capital allocation, i.e., what returns the management is generating on the new capital employed. Let's understand this with an example.

Suppose you have a roadside lemonade business, which has an ROCE of 20 per cent. In order to diversify, you open a roadside eatery. This business generates a 10 per cent ROCE. Your overall ROCE from both the businesses is 15 per cent (assuming same investments) thanks to the higher ROCE of the lemonade business. As we can see in this example, while the average ROCE figure looks respectable, the quality of incremental capital allocation has degraded. That's why tracking incremental ROCE makes more sense.

The list below mentions companies in which the incremental return generated on the incremental capital over the last two consecutive five-year periods is greater than their average ROCEs during the same periods. Also, these companies did not rely on high debt to fuel their growth. This speaks tonnes about the quality of their capital allocation. 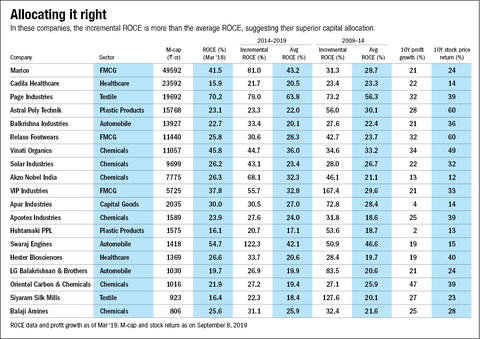