The Bangalore builders | Value Research https://www.valueresearchonline.com/stories/46706/the-bangalore-builders/ Here is how Brigade Enterprises and Sobha, two leading Bangalore-based realtors, stand with respect to each other Here is how Brigade Enterprises and Sobha, two leading Bangalore-based realtors, stand with respect to each other Brigade Enterprises
Founded in 1986 and headquartered in Bangalore, Brigade Enterprises has developed about 40 million sq ft in residential and commercial space. About 64 per cent of the company's revenue comes from the real-estate vertical as per the latest quarterly results. While it has presence in most of the major cities of South India, its focus continues to be on Bangalore, with 75 per cent of its land bank owned there.

Sobha
Founded in 1995 and headquartered in Bangalore, Sobha has completed real-estate and contractual projects of about 96 million sq ft. Sobha is concentrated in Bangalore, which contributes 69 per cent of the company's total sale value. It has been expanding rapidly in other cities, with around 12 per cent revenue coming from Gurugram and 6 per cent from Kochi in the nine months of FY19.

The real-estate sector has been struggling for a long time. However, with the government giving infrastructure status to affordable housing and due to various schemes such as Pradhan Mantri Awas Yojana, some of the bigger players are likely to benefit. Moreover, the inventory pile-up has come down due to increased demand for ready-to-move-in units as they are not subject to GST. 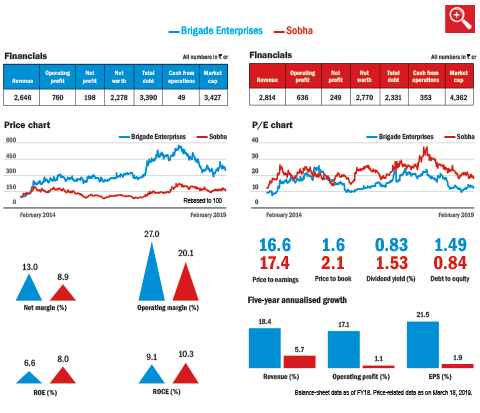