After a stressful 2018 in which rates steadily rose, bond fund managers seem to be breathing a sigh of relief in 2019 expecting benign interest rates from here on. This can be gauged from a notable increase in the average maturity profile of many dynamic bond funds over the last three months. See graph-Rise in duration of Dynamic Bond funds.

Thanks to rising market yields, bond managers had to negotiate a tough 2018 when many bond fund categories lagged the returns of a one-year bank fixed deposit. 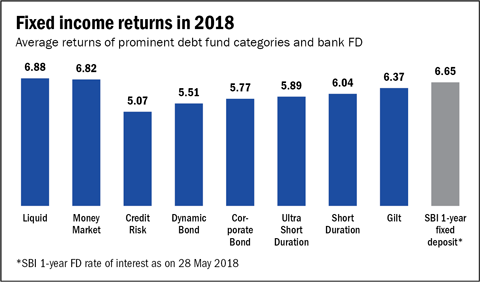 10-year G-sec bond yields rose sharply after the first quarter of 2018 due to macro concerns. "Crude oil prices had started to go up, CPI inflation had started inching up and emerging market currencies including INR were under pressure," says Akhil Mittal, Senior Fund Manger, Tata Mutual Fund. Also, there was a possibility of fiscal slippage due to slower disinvestment and low GST collections. Other global factors like the Fed rate were unfavorable too, he adds.

The RBI hiked the repo rate twice and the 10-year G-sec bond yield spiked to 7.75% by August 2018. Fund managers of dynamic bond schemes took cover by reducing the duration of their portfolios. Bond yields and the value of bonds hold an inverse relationship. A rise in the yield translates into a fall in the value of bonds. 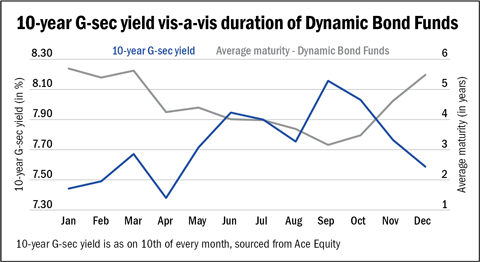 The IL&FS credit event in the third quarter of 2018 further added to bond market uncertainty and the spreads between corporate and government bonds widened. But some fund managers saw it as an opportunity to buy quality corporate bonds at attractive prices. "The corporate bond spreads widened across the curve with 2 to 10-year AAA corporate bonds trading at 9%. The spreads on the corporate bonds offered attractive carry and we increased exposure in 3-5 year corporate bonds which offered decent yields and opportunity of spread compression when systemic liquidity turns to neutral from negative.", says Jalpan Shah, Portfolio Manager - Fixed Income, L&T Investment Management.

Much to the relief of bond markets, the macros started improving rapidly from October 2018. "Over the last three months, crude prices slumped by 35% improving the outlook on Inflation and INR along with CPI Inflation consistently undershooting the expectations," says Puneet Pal, Deputy Head-Fixed income, DHFL Pramerica Mutual Fund. "Aggressive OMOs (open market operations) have also been conducted by RBI to ease the liquidity situation", he adds. 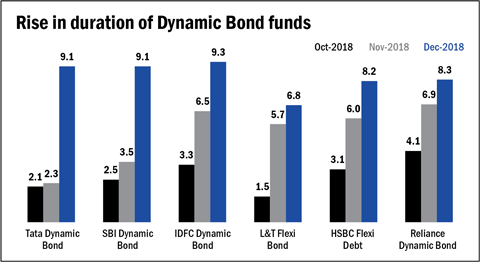 As a result, many debt fund managers have increased the duration of their dynamic bond funds in the last three to four months. The expectation is that domestic interest rates will again start to head down. Going ahead, fund managers expect a change in the RBI's stance to neutral from calibrated tightening, in the forthcoming Monetary Policy Committee (MPC) review scheduled for the first week of February 2019. "Though it may be too early for the rate reversal, we are expecting a change in the stance back to neutral", says Saurabh Bhatia, Fund Manager, DSP Strategic Bond Fund. "There could also be a rate cut of 25-50 basis points in the next 5-6 months," he adds.