An uncertain scenario | Value Research https://www.valueresearchonline.com/stories/45988/an-uncertain-scenario/ Oil investors are in a dilemma whether oil demand has peaked out or not In 1956, M. King Hubbert, a geologist, published a paper presenting a formal theory of 'peak oil' - a point in time when the maximum rate of oil extraction has been reached in the world and post which, oil production would enter terminal decline. Like other theories that forecast the world running out of resources, the peak-oil theory did not take into account the effect of rapid changes in technology. 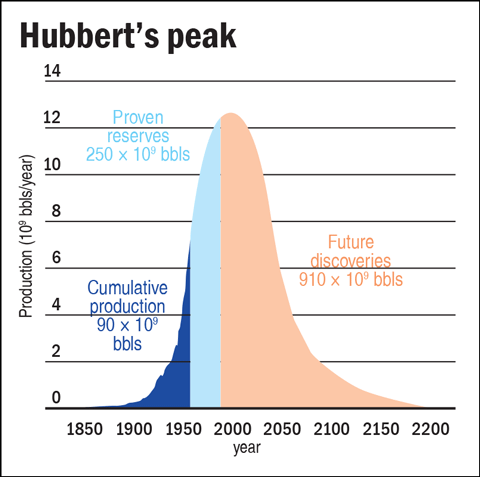 Hubbert predicted a peak of 12.5 billion barrels per year in 2000. For the USA, Hubbert forecast a peak in 1970. For a while, his predictions seemed to be accurate. As recently as 2014, a re-validation of an earlier study in 2004 estimated that oil production had peaked between 2005 and 2011 (refer Wikipedia). The reality is that in recent years, 'fracking' has increased oil production considerably and better technology has increased oil reserves beyond those predicted earlier. The world is not in any danger of running out of oil anytime soon. 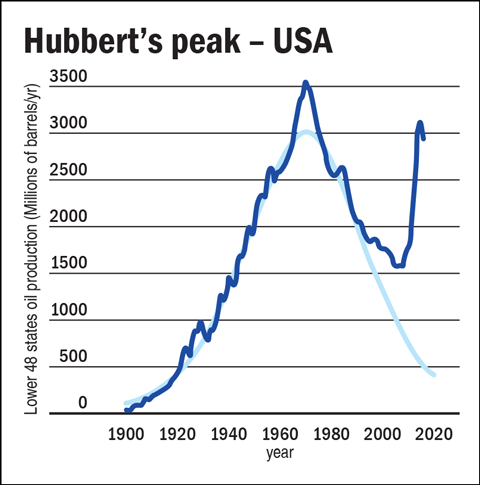 Enters Tony Seba. In 2017, a book called Clean Disruption of Energy and Transportation, written by Tony Seba, was published. It went on to become a bestseller. Seba, along with some co-authors, also wrote for a think-tank called RethinkX (rethinkx.com). In the report related to transportation (and the book), he forecasted rapid changes in travel modes.

One of the key forecasts was that by 2030, 95 per cent of US passenger miles will be served by 'autonomous vehicles' powered by electricity. Car-utilisation rates would increase by a factor of 10x, which would automatically imply a severe reduction in car production. The oil industry would be seriously impacted. To quote, "Oil demand will peak at 100 million barrels per day by 2020, dropping to 70 million barrels per day by 2030. That represents a drop of 30 million barrels in real terms and 40 million barrels below the Energy Information Administration's current "business as usual" case. This will have a catastrophic effect on the oil industry through price collapse (an equilibrium cost of $25.4 per barrel)."
So we now have a prediction of 'peak demand' with falling oil consumption.

Is Seba's prediction credible?
Seba makes a strong case - one can watch his presentation on YouTube at https://bit.ly/2utYPxG and decide for oneself. The key argument underpinning Seba's forecast is that technology changes happen exponentially and not linearly. When several related technologies converge, the adoption of new technology is determined by an 'S' curve, where the straight part of the 'S' can be almost vertical. This leads analysts to underestimate changes when they occur. Seba comes to his remarkable conclusions based on technology changes in energy storage (batteries), autonomous vehicle design and economics of car ownership.

Refining in a sweet spot
Setting up a new refinery requires almost a decade. Whether it is because of Seba's influence or rapid increase in alternate energy that the world is witnessing, investment in refining capacity has slowed considerably, and though demand may slow over the next decade as predicted by Seba, it is not likely that this would be the case over the next two years. In a recent report, Morgan Stanleys' energy anaysts make a case for a 'golden age' for refiners, as slow addition to capacity and still-rising demand lead to a higher refining margin over the next couple of years at least. 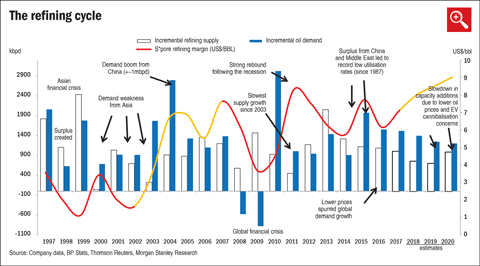 Morgan Stanley forecasts suggest that between 2017 and 2020, only three million barrels of refining capacity would be added in the world as against a demand growth of 5.4 million barrels. The forecast is based on three drivers - increase in road-construction activity, higher demand of diesel as regulation requires shippers to shift to low-sulphur diesel from fuel oil, and increase in consumption of jet fuel. Morgan Stanley estimates a two times increase (compared to the previous three years) in diesel demand, to 3.2 mbpd (million barrels per day) over the period. Complex refiners, especially in Asia - the key region of demand growth - will be the biggest beneficiaries if Morgan Stanley's forecasts turn out to be accurate. 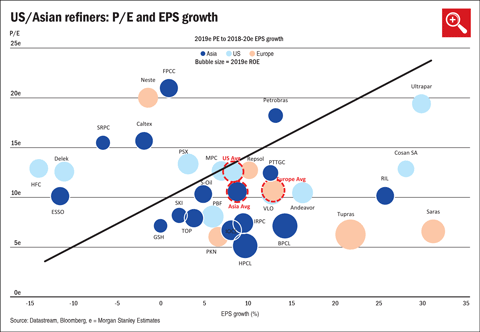 To buy or not to buy
Setting up a refinery of 400 mbpd capacity is a commitment of $10 billion, with a current payback period of 12 years. After an eight-year construction period, if you thought that Seba's forecast were even remotely credible, would you make such a decision? I think not. Consequently, refining margins will likely rise higher as capacity additions lag demand growth. Does this also mean that secondary-market investors should not buy as well? In the true sense of long-term investing, there should not be a difference in the investment approach of a secondary-market investor and that of a company CEO. Reality is, however, likely to be different - and markets will probably look at the near-term profit pop favourably - even as the long-term picture looks uncertain.