Is bottom fishing worth it? | Value Research https://www.valueresearchonline.com/stories/35669/is-bottom-fishing-worth-it/ Here is a study that tells you if you would have done well by picking losing funds in the last 20 years

Is bottom fishing worth it?

Long-term wealth creation is a process that entails a lot of discipline and patience. This is why many investors foment ways to quickly make money. Let us study the risk and rewards of one such method. In a bid to replicate the 'bottom-fishing' concept in mutual funds, some investors pick up 'loser' funds that are at the end of the performance chart in one year and wait for them to turn around in the subsequent year. Value Research analysed the biggest losers in the equity fund arena for every year in the last 20 financial years (FY98 to FY17) to see if such a strategy actually works.

We studied the three worst performing equity funds (those that gave negative returns) of each financial year since 1997-98. Out of these 20 years, in five years, there was not a single fund that posted a loss. Hence, we ignored those years. In the rest 15 financial years, we looked at the worst three funds of each year and monitored their NAV performance in the subsequent fiscal year. In summary, here are our findings.

Losses can be big: In some of the instances, it was seen that a dud fund's losses in a year can become bigger in the subsequent year. Take for example the three worst funds of FY14. DSP Black Rock World Gold Fund (-21.26 per cent), Kotak World Gold Fund (-18.56 per cent) and HSBC Brazil (-11.4 per cent) had a bad year in FY14.

In the subsequent year, two funds posted even bigger losses! In FY15, Kotak World Gold Fund lost another 21.24 per cent and HSBC Brazil Fund tanked by another 29.36 per cent. So in the bid to make profits, you can actually end up buying more losses for your portfolio.

Hence, investing in loser funds is no short cut to profits. While in some instances investors did gain 100 to120 per cent after buying a loser fund, you will also have to be prepared for those nasty years when you are hit with 50 per cent losses. A better way to profit from equity is to invest in good funds for the long term. 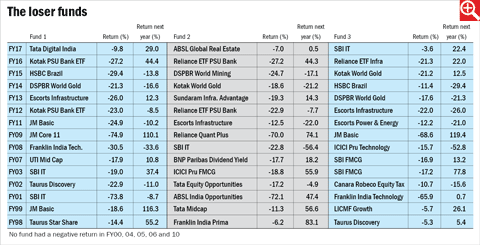