Tech bets start paying off for mutual funds | Value Research https://www.valueresearchonline.com/stories/35528/tech-bets-start-paying-off-for-mutual-funds/ It is a good idea to stay away from thematic sector funds unless one is very convinced about the sector

About ten months ago, technology stocks weren't exactly the darlings of the street. On one side was the sudden and shocking resignation of a top executive amid a quagmire of allegations, while other issues like US visa cost implications, automation angle and low margins did their bit to compress valuations of IT stocks in India.

Fund houses responded by merging or rejigging the fundamental attributes of IT sector funds, and diversified funds cut tech bets as if the writing was on the wall -- traditional IT was over. The last three months (till April 12, 2018) have shown that IT is not dead as investors have once again flocked towards the sector. When telecom scrips are down 21 per cent, PSU banks are down 20 per cent, metals down 11 per cent and oil shares down 10 per cent, 'defensive' technology/IT sector is shining bright with 10 per cent gain. This has helped mutual funds that had swam against the tide. Let us find out more.

2018 ushers change
Having limped to a rather depressing finish in 2016, the tech sector stocks have come back in the reckoning in 2017 and 2018. The last 3 months have been trying time for the Indian stock market. Almost all sectors are in red, with IT sector standing out. Historically, the IT sector has been a favourite for investors looking at high free cash flow generation. The worldwide tech outsourcing boom helped companies like Infosys, TCS, Wipro, HCL Technologies do well. The good and stable financial performance of these companies, which are essentially large-cap, attracted investors in droves. But life is full of ups and downs. The down years like 2008, 2011 and 2016 have come but have been followed by strong rebound in 2009, 2013, 2014, and 2017.

The third quarter of FY18 was muted for most IT companies since it is a seasonally weak period. Geography wise, Europe led growth for these companies amid the slowdown in the US market. BFSI segment (ex-insurance) continued to be under pressure while energy saw good growth and retail probably exhibited early signs of recovery. Management guidance for these companies was hopeful of a better FY19 compared to FY18.

While thematic technology funds remain a riskier bet to play IT/technology stocks, their performance does throw a lot of light on how over the last few quarters tech stocks have started doing well. After posting negative returns in June 16 and September 16 quarters, tech funds as a category got some relief in Dec 16 quarter. However, tech stocks remained under some pressure in the subsequent two quarters i.e. March 17 and June 17. Its only from September 17 onwards some change has been noticed in how the market has looked at this sector. In December 17, tech funds posted a whopping 15 per cent gain in just three months. In 2018, this trend has continued as global markets have been topsy turvy. 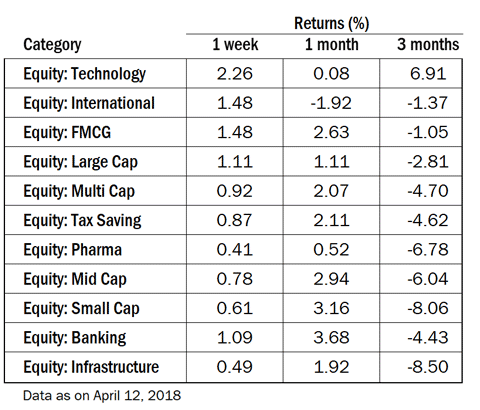 Diversified funds
But it is not as if IT sector has started doing extremely well in terms of financial performance. Fund managers are still waiting for stronger signals for an upturn. Most technology companies being mature businesses were punished for being slow with change and that helped valuations drop quite a bit. Tech sector obviously was still exposed to the sector given their mandate, but many other diversified funds also did stay put in IT stocks.

Quantum Long Term Equity Fund, for example, has been holding IT stocks (Infosys, TCS and Wipro) for a relatively long period of time, its fund manager Atul Kumar said.

Axis MF head equity investment Jinesh Gopani believes large-cap IT could have deep value. "Growth is coming back and the management commentary seems very positive. Large-cap IT is not very contrarian but has shades of contra," he said. The Gopani-managed Axis Focused 25 Fund, for instance, holds almost 6 per cent assets in TCS.

In terms of stock specific holdings, some diversified funds obviously have large holdings in certain IT stocks. To study this, we have ignored the tech funds and exchange-traded funds because they have no other place to invest if they track a single sector or a passive index. Actively managed funds with large holdings in IT stocks show the level of conviction in them.

Wipro is the second largest pick of the 4-star rated ICICI Prudential Value Discovery Fund managed by Mrinal Singh. His fund currently holds 6.18% net asset in Wipro. With momentum investing and bull markets prevalent for the better part of the last three years, the fund has underperformed. But that did not shake Mrinal Singh's conviction in IT stocks. "There are challenges in the technology space. It is not that these companies are not capable of meeting the challenges. The only thing is that there is the traditional part of business which is struggling for growth and it is a big part of revenue. And the new part of the business is galloping at a very fast pace but it is a small part of the business. We have evaluated the strategies that these individual companies are pursuing. Accordingly, we have deployed investments in zones where we think the strategies have the best possibility of succeeding," Singh said in an interview last year.

The jury is still out on IT sector's fortunes as a whole. Tata MF fund manager Sonam Udasi feels that the excessively pessimistic view on IT stocks a few months ago led to opportunities in terms of valuations. As domestic markets struggle to cast off the valuation concerns, it is the valuation mismatch that has probably worked in favour of IT stocks.

Fund experts Value Research spoke to ask investors to buy diversified funds even if they want to play the IT/technology theme. The general advice is also to stay away from thematic sector funds unless one is very convinced about the sector and if the time horizon is less than five years.