My risk or yours? | Value Research https://www.valueresearchonline.com/stories/35297/my-risk-or-yours/ Reading Nassim Nicholas Taleb's 'Skin in the Game' is as wonderful an adventure as one could have hoped for

My risk or yours? 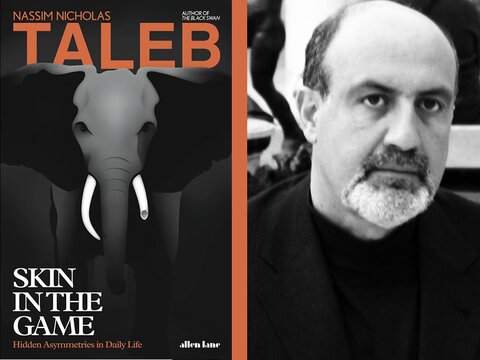 A couple of days ago, I started reading Skin In The Game, the much anticipated new book from the great modern philosopher Nassim Nicholas Taleb. While 'philosopher' sounds like a boring thing to be (and Taleb was a derivatives trader for two decades), this is one of the most fun, enjoyable and yet deep books I've read in a long time. I haven't yet completed it and expect to take many more days over it. However, the book is written in layers, in a manner of speaking. The first 66 pages (in the paperback edition) set forth the main idea of the book, while the rest is a leisurely deep dive into all its implications. I must point out that this is not by any means a review of SITG. Taleb takes great pleasure in skewering reviewers by reviewing their reviews on Twitter and I have no wish to be part of that process.

The central idea of the book is of course in its title. The phrase 'skin in the game' has been popularised by Warren Buffett to refer to company managers whose own stock forms a good part of their own personal wealth, They are, thus, exposed to the consequences of their own actions. This is the very opposite of the ideal of so-called 'professional' managers.

Taleb takes the idea much further and shows--convincingly, to my mind--how the lack of skin in the game lies at the bottom of most of the ills of the world. However, as he points out, skin in the game is not about sharing incentives, but sharing disincentives. Specifically, in personal finance, all kinds of people are willing to help you for an incentive. However, what matters is whether they are willing to share disincentives. That is, if you bear a loss, will they share the loss? Will they cover the loss by coughing up part of the incentives they collected earlier? At the very least, will they come to any harm at all?

One very important aspect of the book is that Taleb makes it clear that skin in the game is not some new concept he has thought up. Rather, it is an idea as old as human civilisation and even today, it is the norm in most aspects of our lives. It is only in a handful of domains like finance, corporate management, bureaucracy, academia, media and a few others that self-perpetuating cliques have seized effective power while shifting risks to others. This asymmetry of risk is what not having skin in the game is all about. This is not historically normal. In the oldest code of law known, Hammurabi's Code from 3800 years ago in ancient Babylon, the best-known law is as follows: If a builder builds a house for a man and does not make its construction firm, and the house which he has built collapses and causes the death of the owner of the house, that builder shall be put to death.

A most crucial point that Taleb makes is that skin in the game mostly works not just by improving people's behaviour, but by eliminating those prone to bad behaviour. It's not just a mechanism of incentives and disincentives, nor even just a learning mechanism, but a filter, a method of deselection.

Now apply this to your own lives, especially to personal finance. There are all sorts of people who have the power to tell you what to do, as well as hand out advice that sounds good. And yet, if they end up doing you harm, is there any way that they can end up sharing the harm? Or of getting eliminated from the pool? Probably not. In fact, in some perverse manner, not having skin in the game has come to be seen as a desirable thing in decision-makers and advice-givers. There are actual regulations that prevent advisors from having a stake in their advice. As an individual dealing with those without skin in the game, the best survival mechanism is to constantly be aware of others' motivations and incentives, and keep thinking of whether they have any skin in the game.

Reading Taleb's books is always an adventure. They are frighteningly learned and require frequent trips to the dictionary and to Wikipedia for full enjoyment. However, this labour is well-rewarded and every page brings something that is exciting or useful to understand.