Keeping the CFO happy | Value Research https://www.valueresearchonline.com/stories/35128/keeping-the-cfo-happy/ For some companies ROCE has shot up with a hike in capital base

Suppose you invest Rs 100 today and after one year you have Rs 115 (15 per cent returns). Now, at the start of new year, let's say you invest Rs 100 more, taking the total capital invested to Rs 215. Will you be able to generate returns higher than 15 per cent to justify the new investment? This is the question that chief financial officers (CFOs) frequently encounter when it comes to making capital allocation decisions.

It is indeed difficult to generate additional returns on capital employed (ROCE) when the base of capital also increases. But the companies listed below have demonstrated this special ability not only for one year but consistently for five years. Indeed, the CFOs of these companies would be a happy lot.

The increasing ROCE on increasing capital of these companies can be attributed to the following:

We have classified these companies into the following two categories:

Consistent performers: These companies had ROCE above 12 per cent five years ago, which has increased consistently in all five years on a rising capital base.

Turnarounds: These companies had ROCE less than 12 per cent five years ago. Now they have ROCE over 12 per cent on a rising base of capital employed. 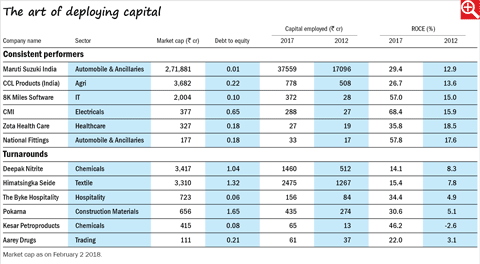