How far is the filling station?

HPCL
HPCL has oil-refining capacity of nearly 16 million metric tonnes per annum. It has 14,412 retail outlets, which are about 24 per cent of the total outlets in India. The number of its LPG distributors stands at 4,532 (as on March 31, 2017). HPCL's majority ownership is being transferred by the government to ONGC and the transaction is expected to be completed in December 2017.

BPCL
BPCL was established in 1952 as Burmah Shell Refineries. In 1976, the Government of India acquired it and renamed it as Bharat Petroleum Corporation. Today, BPCL's oil-refining capacity stands at 35 million metric tonnes per annum. It has 13,983 retail outlets, which are about 23 percent of the total retail outlets. The company has 4,684 LPG distributors (as on March 31, 2017).

Currently, India has the second largest refining capacity in Asia. It is poised to take over China as the largest consumer of petroleum products over the next 20 years. While this gives oil marketers, like HPCL and BPCL, an enormous opportunity to grow, the share of renewable and clean energy continues to grow as well, requiring oil marketers to adapt to the changing environment. 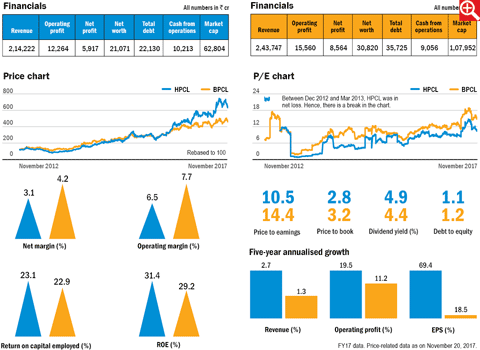