A bumpy future (for ICE)? | Value Research https://www.valueresearchonline.com/stories/34960/a-bumpy-future-for-ice/ The arrival of electric vehicles will disrupt the automobile industry in the near future

A bumpy future (for ICE)?

It has become commonplace to think of artificial intelligence and data analytics driving change in the way future business is likely to be conducted. But disruption need not come only from software, hardware changes, too, can bring about dramatic changes in the industry. The automobile industry globally is at the cusp of one such change - ongoing improvement in battery technology, lower cost of energy storage and a regulatory thrust across many countries towards a 'greener' environment have presented the appropriate impetus for the industry to reinvent itself. If you have recently purchased a new vehicle, chances are that it may be your last vehicle that uses the internal combustion engine (ICE) - electric vehicles (EVs) are knocking at the gate. 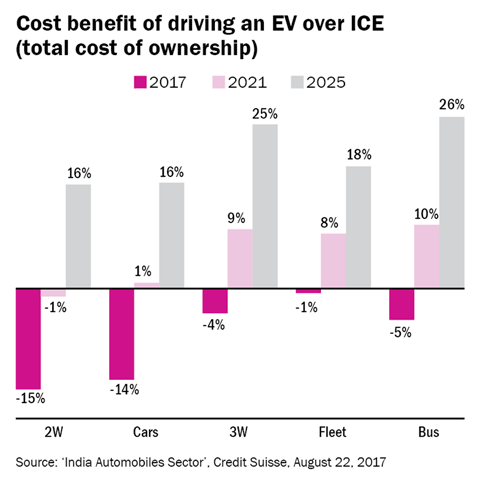 Public transport - the bastion has fallen
A key resistance any new technology must overcome is the economics of using it. Typically, EVs tend to be costly for personal use. An extreme example is Reva (which has been acquired by Mahindra). It appears that Reva makes a loss of Rs 7.5 lakh per car because of its high fixed costs. This is equal to the average selling price of a Maruti vehicle. Clearly, something needs to dramatically change. For public vehicles, like e-rickshaws or buses, though, the economics change dramatically. The widespread adoption of e-rickshaws - mostly imported from China - is a clear indication that the economics work. 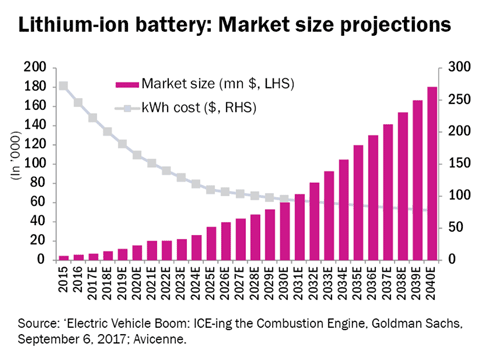 On a single battery charge, an e-rickshaw, can last for a 60 to 80 km range and requires about three units of electricity. This means that against the fuel cost of approximately Rs 1.10 to Rs 1.20 per km for ICE, the fuel charge for an EV is only about Rs 0.2 to Rs 0.25 per km. This is a significant saving. If you also throw in the fact that maintenance costs are significantly lower basis fewer moving parts, the equation is compelling. In fact, many local EV manufacturers price their product in Rs 1.1-1.2 lakh range, which is marginally lower than the equivalent models based on ICE.

A recent study by Credit Suisse indicates that the benefits of using EVs for public transport, including for buses and car fleet operations, become compelling vis-a-vis ICE in about four years from now.

Personal vehicles - the two-wheeler
In the personal-vehicle category, the EV demand still lags on account of battery technology. Car owners, especially in the western world, require their vehicles to run for long distances without recharge and expect higher power engines - both of which are a constraint for EVs at the moment. Attempting to meet this requirement increases the cost and make EVs less attractive. 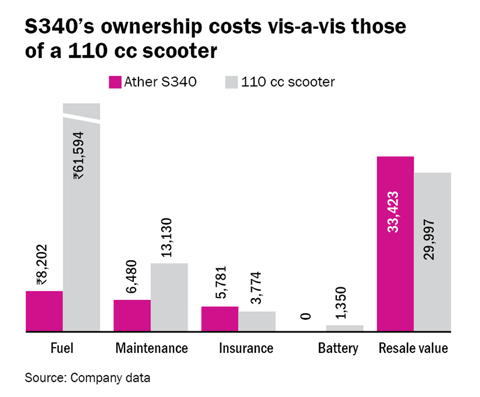 In this segment, the two-wheeler market is already in play. Ather Energy, a start-up backed by Hero MotoCorp, expects to launch its vehicle S340 in 2018. It claims that the design will be superior to the existing scooters, with acceleration at par with existing vehicles and smart features like Google Maps integrated into the dashboard. A video outlining the design can be found here: https://www.atherenergy.com/surge-event.

Ather is not the only manufacturer. Hero Electric has had a product in the market for years and Mahindra plans to launch its product soon. Tork Motors Pune has a product T6X, which is similar to the S340 of Ather.

The battery constraint
The success of EVs depend almost entirely on improvements in battery technology and lower costs. Goldman Sachs estimates that the auto-battery market will increase from $450 million in 2015 to $35 billion in 2025 and further to $180 billion by 2040. Over the same period, they estimate that battery prices will fall from $272/kWh (2015) to $78/kWh in 2040. 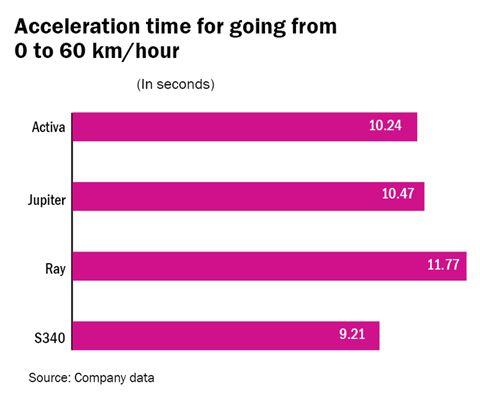 This has huge implications for investments required and demand for raw material. For example, despite ample reserves of lithium, prices of lithium carbonate have doubled over the past two years. The jury is out on which energy-storage technology will be the winner going forward.

One of the key factors preventing early adoption of EVs is the lack of battery-charging stations and standardisation. Here government initiatives to incentivise fast charging stations, battery-swapping locations and standardisation of charging points can go a long way in making sure that EV adoption is helped along. Inner city commuters will probably be early adopters (favouring two-wheelers), while car owners who want to travel inter-city will most likely have to wait for better availability of charging points on the highway. 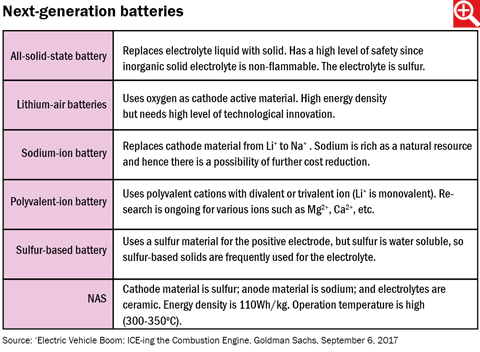 Disruptions
Based on various scenarios, Goldman expects that a 5 per cent increase in EV penetration could reduce oil demand by 1.5 per cent. Lithium and crude are not the only products that will see changes in the demand outlook. EVs require almost 33 per cent lower parts compared to ICE engines. They have no engine-related components, which make up an estimated 23 per cent of ICE vehicles.

Engine-part manufacturers will likely see a significant slowdown as EV adoption improves. On the other hand, tyres, seats and other basic products, like stamped sheets, will likely witness business as usual.

The method of charging batteries itself can have a profound influence on the demand for grid power (if charging is done from the grid, as at home) or renewable sources, such as solar, if swappable batteries become the norm. 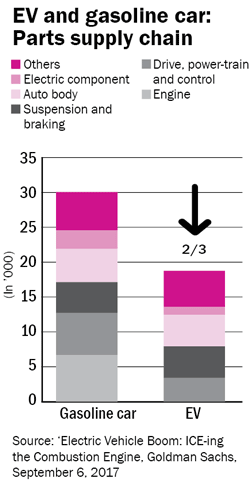 Government policy
In May 2017, the Indian government announced a 'Transform Mobility' plan. In this, the government set an extremely ambitious EV sales ratio target of 40 per cent in 2032. In a significant measure, the government tendered for 10,000 EVs to be supplied for its own use. Tata Motors came in as the lowest bidder, but the encouraging factor was that Indian manufacturers were in top two spots.

As the EV sector play out, there will be many winners and losers. In a disruption of this magnitude, the dice is usually loaded against the incumbents. For example, in the case of e-rickshaws, Bajaj, the dominant player in the industry at present, is clearly the one set to lose the most if the shift happens to EV from ICE vehicles. As usual, predicting the winners is not possible at this stage. Companies supplying the essentials, however, will definitely win. Is lithium going to be the next oil?