Hot gets hotter | Value Research https://www.valueresearchonline.com/stories/34623/hot-gets-hotter/ The FMCG sector, which generally trades at a premium, has become even more expensive, with the current P/E touching 40x

The FMCG sector, which generally trades at a premium, has become even more expensive, with the current P/E touching 40x 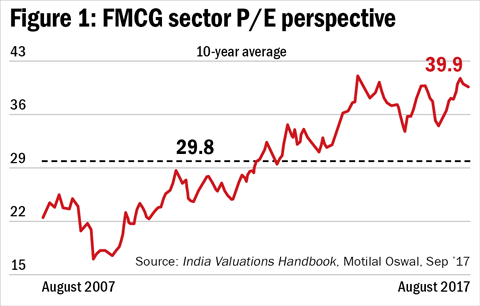 We now take a look at the two most expensive stocks in the FMCG space.

In Jubilant mood: Jubilant Foodworks
Jubilant Foodworks has been a market favourite since its listing in early 2010. The stock peaked in August 2015, giving investors who had held onto the stock since listing an eight bagger. The company has seen rough weather since, with the economy slowing down and demand for what is an urban-led discretionary product come down. Same-store sales growth that was upwards of 20 per cent (Q1FY13) has in some quarters either been negative or in low-single digits. Net sales that stood above 40 per cent (Q1FY13) today stand at 11.5 per cent. Similarly, operating margins that stood at 18.2 per cent have now fallen to 11.7 per cent. Additionally, the company's new launch - Dunkin' Donuts - continues to be a drag on resources.

Expensive me: Emami
Emami has worked its way to becoming a market favourite. Its 2008 acquisition of Zandu gave it the enviable leadership position in the balm category and provided a host of other ayurvedic and OTC products. Emami has grown its revenues at a fast clip of 37 per cent annually in the last three years, while earnings per share grew at 38 per cent. A consistent earnings momentum has the market bidding to pay 85x for Emami's earnings, way higher than its median valuation of 30x.

Emami took a hit in the GST transition, when revenues were impacted by destocking in the wholesale channel that accounts for more than 50 per cent of its revenue. According to the management, restocking started in the last days of July. Many analysts are bullish on Emami's prospects. Strong volume-led growth, high R&D and ad spends, and innovation are likely to keep the company's momentum going. Current valuations, though, leave little for fresh investors.