New India Assurance: Information Analysis | Value Research https://www.valueresearchonline.com/stories/34592/new-india-assurance-information-analysis/ India's largest general insurance company is out with its IPO. But does its reputation justify its valuations? Find out India's largest general insurance company is out with its IPO. But does its reputation justify its valuations? Find out New India Assurance was founded by Sir Dorabji Tata in 1919. As of FY17, It is the largest general insurance company in India in terms of net worth, domestic gross direct premium, profit after tax and number of branches. It has a market share of 15% of gross direct premiums. In FY17, it issued 27.1 million policies across all segments, which is highest among all general insurers in India. In FY17, its claim settlement ratio was 90.4% (including suit claims), which is the highest among the top 10 multi-product insurers.

New India Assurance makes money primarily by selling fire, motor, health, marine, crop and other insurance policies which contributed 15%, 39%, 26%, 3%, 5% and 11% respectively to its gross written premiums in FY17. Their key expenses are insurance claims and the cost of running their operations.

Industry overview
At 0.8% (gross insurance premiums as a percentage of GDP), general insurance is highly underpenetrated in India. In comparison, the global average is 2.8% and 1.8% for China in 2016. With a share of 23% of gross direct premium, Asia is the third largest market for general insurance. Whereas, India accounts for a mere 3.5% of Asia`s general insurance market in 2016.

India is one of the fastest growing general insurance markets in India with total gross premium of Rs 1.3 trillion in FY17. India`s general insurance industry grew at a rate of 18.5% in FY16, just behind the 22% growth witnessed by China. 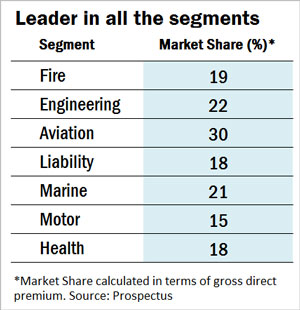 Strong capital buffer without capital infusion
New India Assurance has a solvency ratio of 2.27 as of June 30, 2017, compared to the industry average of 1.76. This ratio measures the company's ability to pay off its claims if all of them materialize at once. The IRDAI's threshold has been set at 1.5 leaving New India Assurance with a strong margin of safety. It has successfully funded its operations without any external capital infusion for more than 40 years.

Going digital
Its digital platform contributed around 13% of gross direct premium in FY17 in comparison to 8% collected in FY15. Its increasing focus towards digital initiatives, strengthening IT infrastructure and launch of new mobile applications will further drive the share of digital platform.

Distribution network
As of June 30, 2017, NIA's distribution network in India includes more than 68,000 individual agents, 16 corporate agents, bancassurance arrangements with 25 banks and a large number of OEMs and automotive dealers. It also had a branch network of 2,452 offices across India and 28 international offices. Its agents, brokers, direct sales and bancassurance channels contributed 42%, 35%,22% and 1% respectively of gross direct premium. Agent's share of gross direct premium has fallen from around 50% in 2015 to 42% as of June 30, 2017, limiting its dependence on a single distribution channel.

Weaknesses
Higher Claims
In FY17, its net incurred claims have risen to 92.5% of net earned premium from 85.5% in FY13. It had a combined ratio of 120% even though it had the lowest operating expense ratio of 20% of net earned premium as of FY17 when compared to the top 10 multi-product players in India. Combined ratio compares the sum of claims and operating expenses with premiums. A value above 100% usually indicates that insurance company is paying out more money in claims and operating expenses than it is receiving from premiums.

Valuation
It is priced on the higher side when compared to its only listed peer ICICI Lombard.

Government control
Government will continue to hold a significant stake post-IPO and will have a significant influence over the company. High government intervention can lead to slow decision making and reduced flexibility. Also, from time to time, it has to participate in government social security schemes which may prove to be a drag on profitability. Often the government derives high dividend from cash rich PSUs.

Where Is The Money Going