Brace for the 'disease' | Value Research https://www.valueresearchonline.com/stories/34111/brace-for-the-disease/ William Baumol theorised that a rise in wages in productive sectors can spread to other sectors, thus resulting in higher prices over time

Brace for the 'disease' William Baumol theorised that a rise in wages in productive sectors can spread to other sectors, thus resulting in higher prices over time 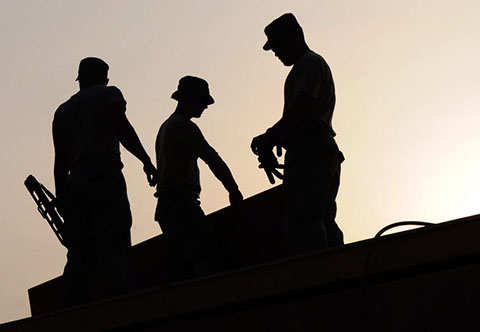 The first week of May marked the demise of economist William Baumol at the age of 95. During his long and distinguished career, he was professor emeritus at Princeton University. He wrote over 80 books and hundreds of journal articles. He made significant contribution to understanding entrepreneurship, environmental economics and transaction demand for money. The 'Baumol effect' or the 'Baumol's cost disease' remains particularly relevant in the modern economy.

The disease
In 1967, Baumol wrote a paper titled 'Macroeconomics of Unbalanced Growth: The Anatomy of Urban Crisis'. Here he examined the effect of improvement in industrial productivity on wages in sectors where productivity increases were minimal.

Post World War II, a revolution in factory automation in the USA drove down the cost of manufactured products as labour was replaced by machines. This meant that for every human employed more output could be produced - allowing manufacturers to pay more to the labour force while simultaneously lowering product prices. Baumol called such sectors where innovation could drive productivity as 'progressive sectors'. What surprised Baumol was that in 'non-progressive' sectors, where productivity was not increasing, wages went up, too!

His particular study was with respect to musicians - a string quartet played a piece of music in the same time in 1965 as they took in 1865. However, they made a lot more money than musicians a hundred years earlier. Essentially, with wages of progressive sectors going up, non-progressives had to increase wages to retain talent.

Consequently, wages and, as a consequence, prices for these services would rise. Extend the logic to other sectors (largely service sectors where manpower cannot easily be replaced) - government services, police, garbage disposal, medical services, etc., and the argument went that prices would rise over time. This is the 'disease'.

Services price inflation - not a matter of efficiency
The prices of healthcare, education and legal services are destined to rise as predicted by Baumol's thesis as compared to the goods manufactured by private producers simply because efficiency cannot increase! This has implications on government policy for providing citizen services. Attempting to curtail costs of public services can often lead to undesired outcomes, where demand needs to be curtailed, essentially by denying services to the less fortunate. 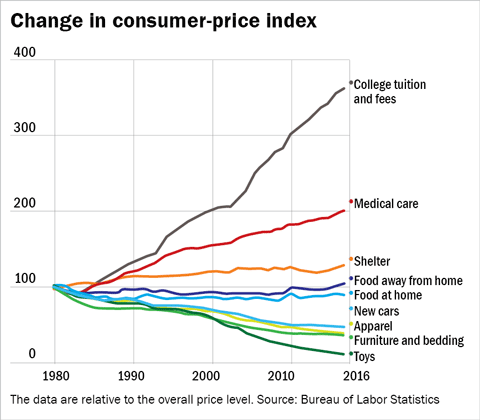 In some cases, the increase in price cannot be explained only by the increase in wages. Clearly, the cost of healthcare or education has outstripped the increase in wages of providers. Some part of the increase can be explained by scarcity. As incomes rise, the affluent are willing to pay a premium for the services that are considered top of the line. Clearly, Harvard cannot expand its student intake to match the growth in demand. It can therefore price itself higher and still find enough takers. Similarly, reputed doctors and lawyers can ask for and receive payments that are perhaps not in line with the cost of delivery of services.

Innovation in service delivery
'Outsourcing' or 'offshoring' that the Indian IT sector achieved is an example of how capacity can increase in services - by adding lower-wage workers to the pool. Slavery was an earlier example of much the same attempt to reduce the cost of agriculture.

Recent innovations in machine learning and robotics, coupled with the internet, can change the inevitability of this price rise. Self-driving cars will reduce demand for drivers and consequently lower their wages. Over time, as computers become better, legal services, diagnostics and perhaps even specialist jobs such as radiologists could face extinction. Early trends already show remarkable success in each of these areas.

As prices of manufactured items fall, we need to spend less on them. The savings eventually go towards things that are not getting cheaper. With more people moving into low-productivity sectors, productivity of the economy as a whole can fall. This can lead to a situation where highly innovative economies grow slowly or not at all - a phenomenon we already witness in large parts of the world. If wages in non-progressive sectors stop to rise on account of globalisation, a backlash against such innovation seems inevitable. Visa restriction and tax on outsourcing can perhaps be viewed in this context.

Whether protectionist methods will be successful in a 'globalised' world is a matter of debate. Alternately, it could well be that from now on globalisation marches in reverse! Baumol may not have foreseen all the consequences of his theory.