Balancing your way to wealth | Value Research https://www.valueresearchonline.com/stories/34058/balancing-your-way-to-wealth/ Asset rebalancing is a magical investment technique that has an unfair reputation of being complex and difficult to implement

Balancing your way to wealth 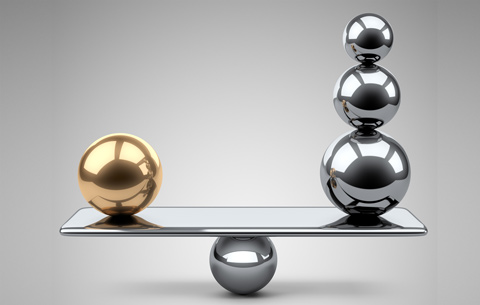 Most investors have either not heard of Asset Allocation and Asset Rebalancing, or assume that they are complicated beasts which they cannot possibly understand or use and which are difficult to understand. Nothing could be further from the truth. These ideas are not only simple and useful, understanding them will help you make better investing decisions.

And as for the difficulty in understanding, let me solve that problem for you in two minutes. Read these three points carefully:
1. Broadly, there are two types of financial investments, equity (shares) and fixed income (deposits, bonds, etc.).

2. Equity has higher potential gains and more risk, while fixed income has lower but steady gains. Depending on your needs, you should be investing in the two in a particular proportion. This proportion, and the process of arriving upon it, is called asset allocation.

3. As time goes by, equity and fixed income gain at different rates, thus disturbing the desired asset allocation. Shifting money between the two to restore that allocation is called asset rebalancing. That's it.

So, is their any benefit, or is this just a nice theory? To find the answer, look at the accompanying graph. You'll see that with annual rebalancing as I have described above, having 40 or 60 per cent equity is a great option. Rs 10,000 grew to 58,600 at 60% equity which was much better than pure equity. In fact, pure equity was the worst of the lot. The returns are lower, and yet there is much higher volatility. When the markets fall, the 40% and 60% allocations fall much less than the 80% or pure equity options. They also rise less when the markets recover, but that's fine because they fell less in the first place.

This lower volatility has financial advantages, but more than that it also has tremendously beneficial psychological implications. It ensures that when the markets crash, you'll be much more likely to stay invested. In the example in the graph, if you had pure equity, then during the 2008-09 crash, you would lose almost 2/3rd (-63%) of your value from the peak of the market in January 2008 to the bottom in March 2009. However, in the 40% equity option, your losses would have been limited to about 23%.

Why does it work?
To understand the mechanism, you can peep a little deeper than the simplified version above. The basis for asset allocation is that the two types of financial assets--equity and debt--are fundamentally different. Not only are they different, they are complementary. In terms of the conflicting need of investments to give high returns and high safety, each plays a role that fills in the other's deficiencies. Let's see how that happens.

There are just three ways that an investment can make money. One, by lending money to someone who pays interest on it, be it a business or a government. Two, by becoming a part owner of a business, as in having a share in it. And three, by buying something that becomes more valuable, like gold or real estate or indeed, any possession.

Equity grows faster than debt (which means all kinds of deposits), but is much more volatile. There are times when it will rise much faster than debt, and there are times when it will grow slower, and will fall. It turns out that the best way to protect as well as take advantage of the fact is to decide upon a percentage balance between equity and debt and stick to it by periodically shifting money away from the one which becomes high and to the one that becomes low. When equity is growing faster than fixed income-which is what you would expect most of the time-you would periodically sell some equity investments and invest the money in fixed income so that the balance would be restored. When equity starts lagging, you periodically sell some of your fixed income and move it into equity. Inevitably, things revert to a mean, and that means that when equity starts lagging, you have taken out some of your profits into a safe asset.

The effect, as you can see from the accompanying graph, is almost magical. Volatility, the bugbear of equity investing, is damped down and returns are hardly affected. And yet, this sounds like hard work to implement. But it isn't, thanks to a special kind of mutual fund, which we'll discuss next week.