The world beckons | Value Research https://www.valueresearchonline.com/stories/33909/the-world-beckons/ Allocating some part of your equity investment to foreign stocks makes sense, yet too few Indian savers use this option

Allocating some part of your equity investment to foreign stocks makes sense, yet too few Indian savers use this option 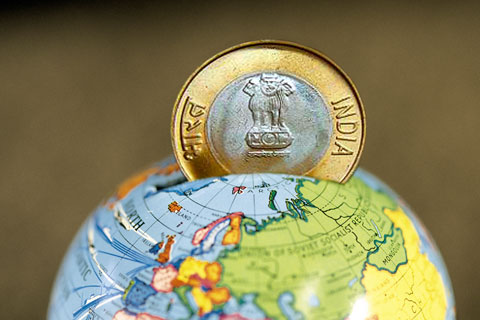 Till 2003, Indian savers could not invest anywhere outside India. You couldn't put your money into an American mutual fund, or buy shares of Toyota or Microsoft or make any other financial investment outside India. This changed in that year's budget, when Finance Minister Jaswant Singh opened the way for Indians to invest abroad, both directly into stocks as well as through mutual funds. However, this is not an option that has become as popular as it deserves to. Let's see why that happened and why you should consider investing abroad.

Foreign investments for individuals opened up a type of diversification that was new to Indian investors. Diversification is one of the central tenets of investing. The basic idea is that different kinds of investments--different by type of industry, company size and geography--generally tend not to do badly all at once. When some do badly, others do better. Professional investors have a whole theory of which types of investments are likelier to move together and which move in opposite direction, but common sense works pretty well too.

The logic of investing across different countries seems unbeatable. If the stock markets of one part of the world do badly, then having some money in another part would offer protection. When foreign investments were opened up, a lot of people expected that they would be a popular option. However, as it happened, the story turned out very differently.

In the years that followed, the Indian stock markets went up many times. At the point when foreign investments were permitted, the Sensex was at 3,300 points. In the next four years and ten months, it went up 6.2 times. By contrast, the American S&P 500 index went up 1.8 times in the same period. Through that entire period, the Indian stock markets offered some of the highest returns in the world and there was no way that Indian investors would be attracted to putting money into markets that were underperforming India.

In fact, most atypically, even the foreign exchange rate favoured India during this period, when US Dollar fell from 47.66 to Rs 39.37 to a rupee. Forex rates play a big role in foreign investing. The general long-period trend is for the rupee to lose value against the USD, and this helps Indians who invest abroad, with dollar gains acting as a booster dose to whatever is happening to your investments themselves. However, the 2003-2007 period was an exception, and that further made Indian savers think that foreign investments were not worth it.

Then came the great financial crisis of 2007-08. Domestic stocks collapsed, but foreign ones collapsed just as badly. In fact, the entire financial crisis was triggered by American problems. Clearly, when the whole world crashes then having a little more in one market than the other wouldn't have saved you from anything. This is the flip-side of globalisation. If businesses around the world can share the spoils of global growth, then they must also pay a shared price for a global slump. This further put paid to the idea of global diversification. Or does it? It so happens that 2003-08 was just about the worst starting experience for investing around the world. First, the Indian markets had an exceptional bull-run, and then there was the rare synchronised global collapse.

This experience was made worse by the fact that the Indian mutual fund industry made a series of ill-judged choices when it came to the actual foreign-investing mutual funds they launched. There were a plethora of specialty funds that were limited to investing in a specific sector, theme, narrow region, commodity or some such thing. There were few general-purpose equity funds which could pick up the most promising stocks from any industry, anywhere in the world. Just like their domestic equivalents, these thematic funds were basically a marketing ploy which did not generate convincing returns.

However, despite this experience, global investing is a worthwhile diversification. In fact, this was proven during the period immediately following the financial crisis. From the end of 2007 to the end of 2013, the BSE Sensex generated total returns of 4 per cent, while a rupee investment in the US markets would have doubled your money.

All in all, if equities are a part of your long-term investments, then a certain part of it (perhaps 10-20 per cent) should be invested globally. There are a number of Indian mutual funds available for this. However, you should know that while equity fund returns from investments of over one year are tax free, this tax break is only available to those funds where at least 65 per cent of the money is invested in Indian equities. This gives an advantage to those mutual funds that invest in Indian equities, but allocate a small proportion externally. This also frees the saver from having to take the decision of how much to invest abroad.

All in all, I would strongly recommend global diversification for all Indian equity investors. It may or may not turn out to be a good idea in any particular time frame, but overall, it will be a positive factor in your investment portfolio.