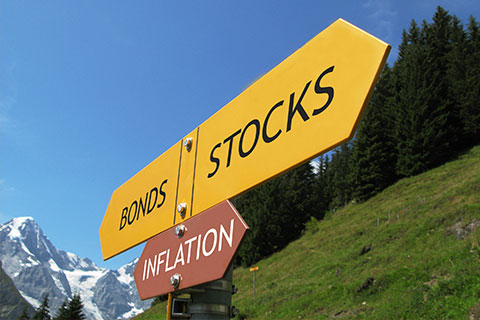 Many investors buy only stocks. These are people that eat, drink and sleep stocks. They have no interest in mutual funds, government bonds or provident funds as investment avenues. Yet, even if you belong to this group, you need to understand the relationship between bonds and stocks. There is money to be made learning this. But first we need to tackle an unavoidable factor that affects returns of both: inflation.

The inflation effect
Inflation is the general rise in prices of goods and services. When the price level rises, you can buy only fewer goods with the money you have. To maintain the value of money, people invest in various avenues. Your objective as an investor is to ensure that your nest egg or retirement fund is growing faster than inflation. The consumer-price inflation today stands at 3.81 per cent (March 2017). Your portfolio has to rise by at least this much just to maintain its purchasing power.

If you had invested in the Sensex last year, you would have finished with a gain of 2 per cent (as of calendar year 2016). A positive gain in a difficult year, one could say, but if you take into account the 5 per cent consumer-price inflation during that period, your real gains would be negative. You would be worse off at the end of the year than what you would have started with.

The RBI has indicated that consumer-price inflation could come in at 4.5 per cent in the first half and at 5 per cent in the second half of FY17-18 - that's if the monsoons are normal. This becomes the threshold return any investor would need just to beat inflation.

Bond yields
A bond yield is the return you can expect when you buy a bond. The current ten-year government-bond yield stands at 6.85 per cent. That means you can count on earning 6.85 per cent every year till the bond is redeemed at the end of the tenth year. At current inflation levels, an investor who buys the government bond still stands to increase his purchasing power beyond the corrosive nature of inflation. Thus, when bond yields are higher than inflation, they become attractive to investors. Let's add stock yields to this mix.

Stock yields
Stocks have their own yields, too. For our purpose, a stock yield is the company's earnings divided by the current share price. If the earnings are, say, Rs 20 per share and the stock trades at Rs 200, the earnings yield comes to 10 per cent. The yield on any stock therefore depends on the earnings and the price you pay for it. As an investor, you have two objectives:
1. Find stocks whose yearly earnings yield can beat inflation.
2. Latch onto an earnings stream that can beat the current yield on government bonds.

Stocks become the more-attractive opportunity when they can beat both inflation and the current yield on government bonds. If markets become heated, the number of stocks that can beat the bond yield falls, indicating that the time to invest in stocks is turning rough.

Growing stock yields
When it comes to stocks, you have an advantage that bondholders do not enjoy. The coupon on the bond remains fixed, but for a stock, yields move up as the earnings of the company grows.

You can buy a stock with a lower yield than, say, the government bond and still end up earning more than a bond. How? By piggy-backing on the company's earnings growth, which eventually will drive your returns higher than the bond yield in a couple of years.

Let's take the example of Infosys - a troubled tech company that has seen its share of ups and downs over the past couple of years. If you had bought Infosys five years ago, you would have paid Rs 600 for a share. At earnings of Rs 41.21 per share (FY13), your earnings yield (or the return that you would earn at that price) would have come to 6.87 per cent - lower than the prevailing bond yield of 8.6 per cent at that time. Now as Infosys has grown its earnings every year by around 13 per cent (rupee terms, compounded annually), your return on the initial investment has also gone up. 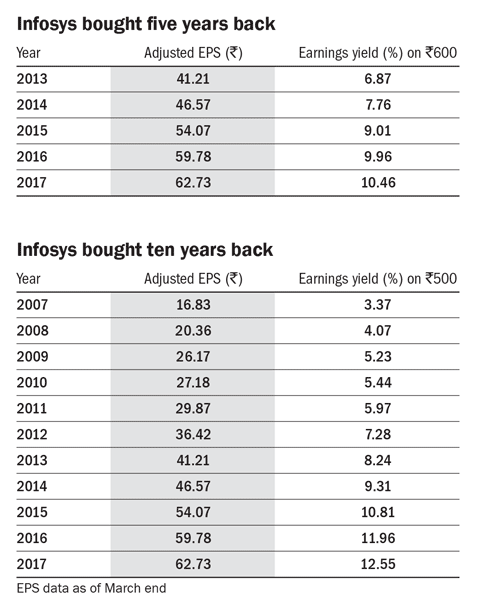 See the first table. It illustrates the initial return of 7 per cent that you would have earned at a price of Rs 600 that you paid for a share of Infosys. As earnings grew in the first year, your returns improved to 7.76 per cent and so on till 2017, when the company earned Rs 62.73 for every share. This translated into a return of 10.46 per cent for the shareholder who bought the share at a price of Rs 600 five years ago.

Now compare the returns if you had decided to put your money in a bond. Five years ago, a government bond would have yielded you 8.6 per cent. That means you would have earned 8.6 per cent every year till maturity. Buying Infosys even at a lower initial yield and holding onto it now gives you a yield higher than the bond-yield return and as earnings continue to grow, your returns will go higher.

Now let's take an even longer time frame. Continuing with Infosys, we assume we bought the stock ten years back. The stock was trading at Rs 500 levels and the adjusted earnings per share stood at Rs 16.83 (FY07), giving you a return of 3.37 per cent, again way lower than the government bond yield of 8.1 per cent at the time. The company now earns Rs 59.78 (FY17) per share which was bought at Rs 500. That translates into a return today of 12 per cent, way higher than the 8.1 per cent from the bond available at that time (see the second table). Infosys' current earnings yield of 11 per cent marks the still open opportunity in the stock.

The table below lists out the top companies with an earnings yield higher than the bond rate, with low debt and with high returns on capital. These are rich grounds to start searching for your next investment. This column appeared in the May 2017 issue of Wealth Insight.