Trumping the leader | Value Research https://www.valueresearchonline.com/stories/33001/trumping-the-leader/ Giving the industry leader Exide a run for its money, Amara Raja has built itself into a formidable competitor in the battery space

Giving the industry leader Exide a run for its money, Amara Raja has built itself into a formidable competitor in the battery space Amara Raja is the second largest lead-acid battery manufacturer in an industry that is a duopoly in the country. Amara stole market share from the industry leader Exide as the latter slackened in the last couple of years. Amara's ten-year average annual sales growth of 31 per cent is something Exide just couldn't keep up with.

An interesting nugget: both Exide and Amara average the same returns on capital employed - at 34 per cent in the last decade. The difference though is that while Exide's return has steadily declined in the last decade, Amara's has gone up.

Why Amara can continue to be an Unusual Winner
High-pedigree parentage: Johnson Controls, the US-based global automotive battery manufacturer, holds 26 per cent in Amara. This gives the Indian unit access to technology, innovation and cost advantages - the very advantages that enabled Amara to capture market share, particularly in the last six years.

Automotive market: ticket to riches
Amara had made a name for itself in the telecom segment, where it holds a market share of 50-60 per cent, before it ventured out in the automotive-battery segment. Today, the auto segment brings in a little more than half its revenues. Amara has successfully snagged market share from Exide and made strides in the four-wheeler, two-wheeler and replacement markets in the country. Successful branding and advertising has helped the company build its flagship 'Amaron' into a household name.

Gains over Exide to play out over the long term
Over the last couple of years, Exide took its eye off the ball. Its capacity became constrained. There were shortages of Exide batteries in the replacement market as the company decided for a period of time to focus on the original-equipment market and made some non-core capital allocations into areas like insurance. With Exide not actively defending its market share, Amara moved in with better technology, lower prices and greater availability of its batteries, especially in the automotive space. This helped Amara build a share that Exide will find hard to displace, allowing Amara to keep reaping benefits in the next couple of years. 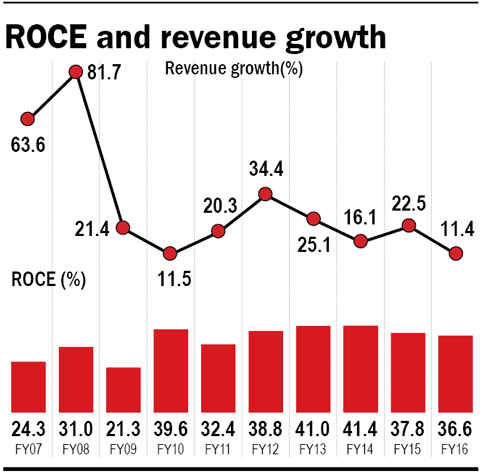 Outlook and valuations
Exide has made some course correction in the recent past with fresh investments in technology and plant and machinery, thereby limiting more market-share grabbing by Amara. Amara has, however, built itself into a formidable competitor for Exide. Its technology and value positioning can act as a big hurdle for Exide to beat. Amara's valuations are pricey though. The stock is trading at 31 times earnings - higher than its five-year average of 22x. A key risk remains the state of the automotive market, which is in turn dependent on the state of the economy.