In spite of the passage of several weeks, the demonetisation debate remains red hot. Here is why 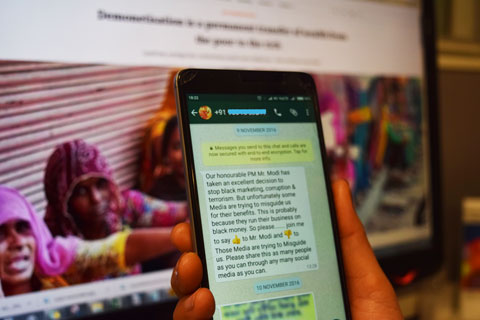 I am writing this on the last day of November 2016. Over the last three weeks, the only thing that India has discussed is demonetisation.

As I travel to Nariman Point in Mumbai for a meeting, even the Uber driver can't stop talking about it. He is busy giving me details on what impact the move is likely to have in the assembly elections of Uttar Pradesh, which are scheduled in 2017.

A friend who is against demonetisation thinks that the number of deaths due to it has been played up by the media. Another friend thinks that death is god's will and hence has got nothing to do with demonetisation. His view is that if people weren't standing in a line for money, they would have still died somewhere else. To cut a long story short, there is no dearth of views on demonetisation and the impact that it has had on the Indian society.

On November 8, 2016, in a late evening address to the nation, Prime Minister Narendra Modi announced the demonetisation of `500 and `1,000 notes. Until December 30, 2016, these notes can be deposited in bank accounts and post-office accounts, and the money will be credited against these accounts. Initially, the exchange of demonetised notes for the notes which continue to be the legal tender was allowed, but since then it has been stopped.

In the interim period, discussions around demonetisation are all over the place. People have been arguing passionately in favour as well as against it. Such is the intensity to understand why demonetisation was carried out and how it will benefit or not benefit the nation in the days to come that long WhatsApp forwards are being sent in favour or against the decision.

In fact, not a day goes by when my friends don't share WhatsApp forwards with me and ask me what I think about the particular issue being discussed.

The irony is that even individuals who are not so vocal about what they feel about political and economic events have been vocal this time around. Of course I don't have any aggregated data for this, and I am saying this is from my personal experience.

One reason for this lies in the fact that the demonetisation of such huge magnitude has never been carried out in India before. Those in their 50s will tell you that demonetisation happened in the late 1970s as well. But that was nothing in comparison to the scale of demonetisation this time around. Around 86 per cent of notes in circulation by value have been rendered useless by this move.

Other than the magnitude of the move, I think there is another reason why people just can't stop talking about demonetisation. Allow me to explain.

In his book, Pre-Suasion: A Revolutionary Way to Influence and Persuade, Robert Cialdini talks about a set of experiments. As he writes, "In one set of studies, people either watched or listened to television programming, including commercials for soft drinks, mouthwash, and pain relievers. Later, their memory for the commercials was tested. The greatest recall occurred for the details of the ads that the researchers stopped five to six seconds before their natural endings. What's more, better memory for the specifics of the unfinished ads was evident immediately two days later and (especially) two weeks later."

Cialdini talks about another set of experiments in which women participated. As he writes, "The women participated in an experiment in which they knew that attractive male students (whose photographs and biographies they could see) had been asked to evaluate them on the basis of their Facebook information. The researchers wanted to know which of these male raters the women, in turn, would prefer at a later time. Surprisingly, it wasn't the guys who had rated them highest. Instead, it was the men whose ratings remained yet unknown to the women."

So what do the two experiments tell us? The first set of experiments "demonstrated the holding power that a lack of closure possesses." In the second experiment, the men who kept popping up in the mind of the women who were a part of the experiment were those whose ratings had not been revealed. Again, there was a lack of closure.

The point in both the cases, as Robert Cialdini writes, is that "when an important outcome is unknown to people, they can hardly think of anything else." This is precisely why in the second case the men whose ratings are unknown to women get the maximum attention and this focus on those guys "made them appear the most attractive."

Hence, they keep going back to it in order to understand why it has been done, why the changes are being made on an almost daily basis and how it will ultimately play out in the long term.

This basically means that other than the economic and political impact of demonetisation, there has been a psychological impact as well.