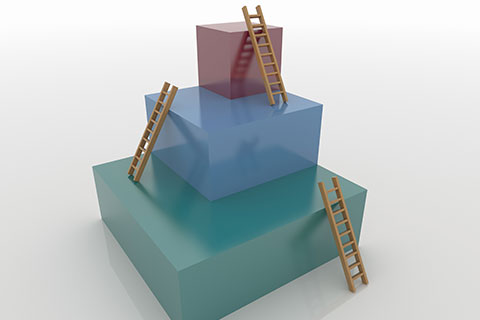 Early in August, the SEBI invited public comments on ways to introduce limits on algo trading. Traders were disappointed at the attempt of the regulator to impose restrictions in ways that would reduce their ability to benefit from high-powered computers, co-located with exchange servers to provide that nanosecond advantage before prices are available to all. Interestingly, the thrust of the SEBI's approach seems to be to reduce the advantage of high-frequency traders only - slow-moving algorithms are unlikely to be affected.

While the debate rages on about the need and trade-offs for imposing restrictions, Mark Mouboussin of Credit Suisse put out a note on traits that make for great fundamental investing. In an era dominated by high computing power, it is instructive to re-look at the principles and requirements that drive investment performance.

Ten attributes - in three
Mouboussin's note makes a list of ten attributes. Now, most such lists end in ten not because of any intrinsic feature of the subject in hand but because it appears to be a reasonable length - an adequate trade-off between too long and two short. I will summarise this into a list of three - my favoured length - beyond which, dear reader, I will likely lose your attention.

Know the business: "Cash is fact; profit is an opinion" - Al Rappaport
Financial statements are the starting point of investing. They present an investor with a snapshot of financial position of a company. Most investing revolves around earnings and earnings growth. However, it is well known that what drives 'value' in a company is not its profits (which can be increased by financial engineering) but its ability to generate an economic return over the cost of capital. Companies that consistently generate a rate of return higher than the cost of capital are likely to be doing something that is difficult to replicate - and this requires understanding the competitive position of the company. Fundamental investing is about estimating the present value of future cash flows and that requires understanding the magnitude and timing of free cash flows over time.

Besides its competitive position, it is also important to understand 'unit-cost economics' - what really drives the cash flow of companies. For example, is each transaction with a client making money or is it based on multiple transactions with the client before the company makes money, i.e., is the cost of acquisition of clients high or low? This will determine how easy it will be for new entrants to chip away at the business of incumbents and consequently how much you should pay for this forecast cash flow.

The most-important aspect of this analysis is to understand that these are forecasts - and therefore prone to errors. It is necessary to think probabilistically - the expected value of future cash flows needs to exceed the expected value of cost of capital for the investment to work. And almost as a corollary, it is important to update expectations as fresh information comes in that changes future estimates, which bring up the next point.

Know yourself: "Beliefs are hypotheses to be tested, not treasures to be protected"
The famous quote "When facts change, I change my mind - what do you do?" has been variously attributed to Samuelson, Keynes and some others. This effectively sums up the need to constantly re-examine the assumptions made when making an investment. The 'confirmation bias' is a well-analysed human behaviour, where we seek out opinions that support our own and disregard those that are opposed. Good investment requires being 'actively open-minded' - a term coined by Jonathan Baron (professor of psychology at university of Pennslyvania) - indicating a willingness to actively search for evidence against one's beliefs and to weigh such evidence fairly when it is available. This constant evaluation of one's position can be unsettling, but it remains a hallmark of a good investor.

Behavioural finance has made large strides in recent years, pointing out how humans use heuristics and anchoring to make quick decisions. While these are useful traits, they also lead to judgements that can be erroneous and need to be guarded against.
One key distinction to be made is between the information content conveyed by stock-price movement, and the effect of 'influence'. While prices are determined by equilibrium between demand and supply and often provide information about the market, they do tend to move to extremes, leading to bubbles and depressions. This has been modelled in various ways, including through a 'threshold' model - where despite not agreeing with the 'price information', investors are forced to participate along with the price movement. A crowd is often right, but when it is wrong, psychological fortitude is needed to go against the grain.

Know when to hold 'em, know when to fold 'em, know when to walk away
A large part of portfolio performance comes from position sizing. While most investors focus on trying to find a stock where they have an 'edge', unless backed by a bet size that is significant, it is unlikely to significantly change performance of the portfolio. A 1 per cent allocation can only increase performance by 1 per cent on an overall basis if it doubles. Knowing when to take a large bet or increase the bet size when a position is going in your favour is a key learning.

With larger bets comes the need to understand where the danger may come from. Also, to get ideas before they become mainstream, it's important to have a world view that is constantly updated. Reading - about everything - is the easiest form of keeping abreast of new ideas and constantly updating oneself. Without this constantly updated viewpoint, stagnation is inevitable.

Many of these statements sound like homilies - but implementing these can lead to consistent and profitable portfolio performance. That said, it's easier said than done and requires regular practice. At a time when asset markets seem to be making new rules, it may be useful to remember that 'this time it is different' is the one statement that has proven consistently wrong when it comes to investment performance over decades. Some things don't change and it is useful to remember that.